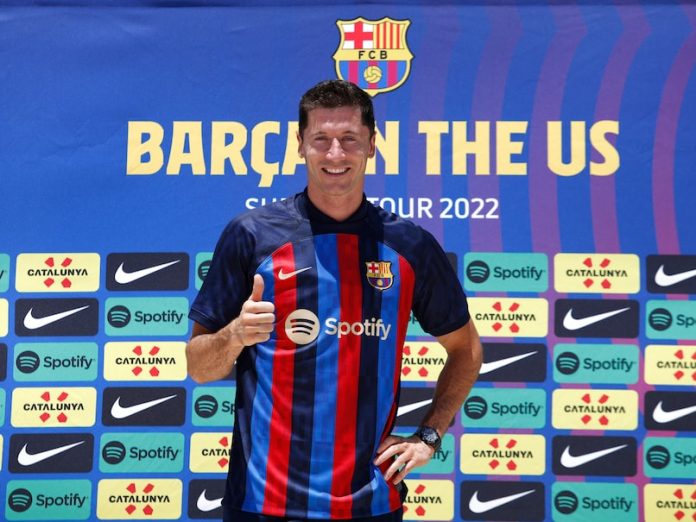 Robert Lewandowski has on Thursday been officially unveiled as a Barcelona player as the club continues to push for new transfers despite their deep financial crisis.

The Polish striker, who was signed from Bayern Munich for around €50m, has said he still has the hunger to continue his incredible goal-scoring exploits.

Lewa, 33, was formally introduced as a Barca player alongside club president Joan Laporta.

The unveiling came a day after the La Liga side started their four-match tour of the United States with a 6-0 win over David Beckham’s Inter Miami.

Lewandowski joined Bayern in 2014, scoring 344 goals in 375 competitive matches and breaking the Bundesliga’s single-season scoring record when he registered 41 goals in a single season in the 2019/2020 campaign. The previous record was held by Gerd Muller (40 goals).

The Pole is looking forward to a probable El-Classico debut in Las Vegas this weekend as Barcelona face arch-rivals Real Madrid.

Lewandowski said concerning his transfer, “We worked hard to get to this moment, but we got there in the end.

“I am always hungry to succeed and have a winning mentality. This is a new challenge for me, and I have already seen this is a squad with huge potential.

“There is a lot of quality, and I want to do my best for the club. I am ready.”

Lewandowski joins Barcelona in the midst of a financial crisis.

Although the club have racked up debts amounting to nearly €1bn, the striker becomes the club’s fourth summer transfer after the signings of Ivory Coast midfielder Franck Kessie from AC Milan, Chelsea defender Andreas Christensen on a free transfer, and Brazil winger Rafinha.

“We are doing our best to restructure,” said Laporta. “We did a lot of work to make this happen.

“There is a big expectation for you (Lewandowski). You are a football star.”