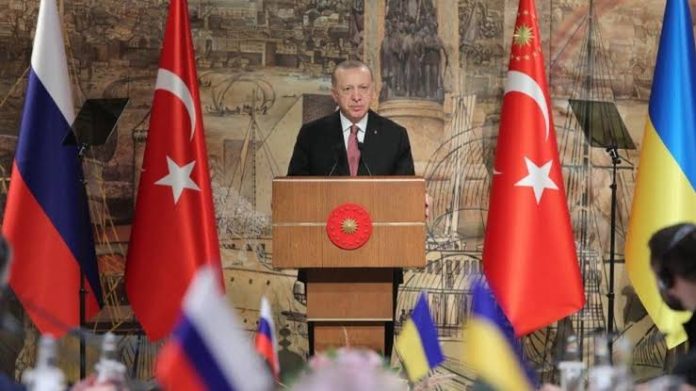 Delegation from Ukraine have arrived Istanbul Turkey for grain talks, AF24NEWS has learnt.

Ukrainian grain after Russian strikes at Polyana village in Mykolaiv region. Russians did this on purpose and now they are negotiating in Istanbul how to unblock grain export… https://t.co/WWxykzq3h9

Up to 25 million tonnes of wheat and other grain have been blocked in Ukrainian ports by Russian warships and landmines Kyiv has laid to avert a feared amphibious assault.

The crisis has sent global food prices soaring and pushed millions of people in the world’s poorest countries to the edge of starvation.

A UN spokesman refused to say whether a final agreement would be signed during talks with the warring sides’ delegations in Istanbul on Friday.

Russian demands
Turkish Foreign Minister Mevlut Cavusoglu had earlier on Thursday said he was “optimistic” that last-minute conditions put on a deal by Russia could be overcome.

“We have hope for grain,” Cavusoglu said in a televised interview. “We hope to give good news in the coming days.”

The first direct talks between the warring sides’ military delegations since March — attended in Istanbul last week by Turkish and UN officials — came up with an initial draft for resolving the impasse.

The sides were meant to have met again this week for the possible signature of a formal agreement.

But Russian President Vladimir Putin threatened to derail the talks by warning on Tuesday that he expected any agreement to also address his own country’s blocked grain exports.

The five-month war is being fought across one of Europe’s most fertile regions by two of the world’s biggest producers of grain.

Almost all of the grain is usually shipped out of the region across the Black Sea.

“When we resolve this issue, not only will the export path for grain and sunflower oil from Ukraine be opened, but also for products from Russia,” he said.

“Even if these Russian products are not affected by sanctions, there are blockages concerning maritime transport, insurance and the banking system,” he said.

“The United States and the EU have given promises to lift these,” he said. “I am optimistic.”

Three ports
NATO member Turkey has enjoyed good working relations with both Moscow and Kyiv throughout the conflict.

A member of Kyiv’s delegation for the negotiations said the shipments could resume from three ports under full Ukrainian control.

“Exports would take place through three ports: Odessa, Pivdennyi and Chornomorsk. But in the future we hope we could expand them,” Ukrainian lawmaker Rustem Umerov told reporters.

He added that the safety of the shipments would be overseen by a UN monitoring group based in Istanbul.

Umerov also said that Russian ships should not be allowed into Ukrainian waters as part of the anticipated agreement.

“We do not trust them, even if they sign an agreement with the UN. This is an aggressor country,” he said.