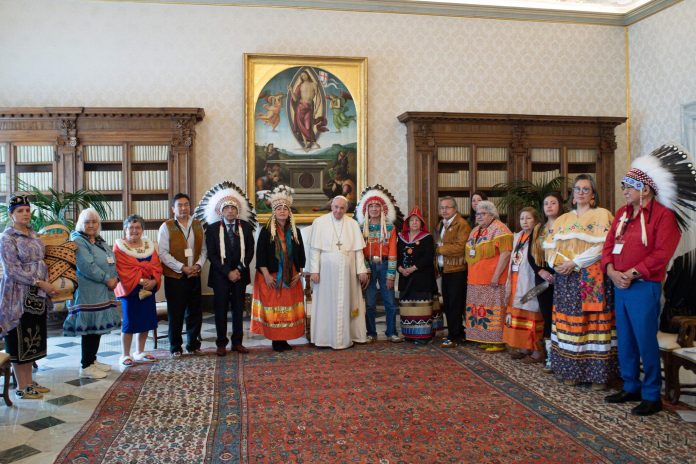 #Pope Francis formally apologized on Monday for the ways in which members of the Catholic Church participated in a system of cultural destruction and forced assimilation of Indigenous peoples, calling the effects of residential-school policies “catastrophic.”

Speaking to a gathering of thousands of residential school survivors and their families in Maskwacis, Alta., he apologized for the “colonizing mentality” that oppressed Indigenous peoples, with devastating impacts.

“I am sorry. I ask for forgiveness, in particular, for the ways in which many members of the Church and of religious communities co-operated, not least through their indifference, in projects of cultural destruction and forced assimilation promoted by the governments of that time, which culminated in the system of residential schools,” he said at an outdoor gathering near the former site of the Ermineskin Indian Residential School, once one of the largest residential schools.

Monday’s apology, issued in Canada, is one many survivors had waited decades to hear. The Pope is visiting the country in a six-day tour that will include stops in the Edmonton area, along with Quebec City and Iqaluit. Pope Francis calls it a “penitential pilgrimage” or pilgrimage of penance, a trip that is focused on healing and reconciliation with Indigenous peoples.

He will address the impact of colonization and the Catholic Church’s role in running residential schools in a series of remarks this week.

Pope Francis said that though Christian charity “was not absent” and that there were “many instances of devotion and care for children” the overall effects of residential school policies were “catastrophic.”

“I humbly beg forgiveness for the evil committed by so many Christians against the Indigenous peoples,” he said.

The policies were a “disastrous error,” he said, incompatible with the gospel of Jesus Christ, for which Indigenous peoples continue to pay the price.

He said an apology is not the end of the reconciliation process. “That is only the first step, the starting point,” he said, adding that a key part of this process will be to “conduct a serious investigation into the facts of what took place in the past and to assist the survivors of the residential schools to experience healing from the traumas they suffered.” He didn’t specify where and how such an investigation would take place nor who would conduct it.

The apology, and the visit, have been a long time in coming. In 2015, the Truth and Reconciliation Commission called upon the Pope to apologize in Canada, within a year, to survivors, their families and communities for the Roman Catholic Church’s role “in the spiritual, cultural, emotional, physical, and sexual abuse” of First Nations, Inuit, and Métis children in Catholic-run residential schools.

In late March, several hundred Indigenous delegates travelled to the Vatican to meet with the Pope. They spoke of the devastating, intergenerational impact of the schools, where thousands of children were punished for speaking their language and practising their culture. They called for an apology and invited him to come to Canada.

At the end of their meetings, addressing survivors in the Apostolic Palace hall of the Vatican, the pope delivered an apology: “For the deplorable conduct of those members of the Catholic Church, I ask for God’s forgiveness and I want to say to you with all my heart: I am very sorry.”

Many survivors have said they hope an apology in Canada goes further, encompassing the role of the institution as a whole, rather than some individuals.

The discoveries over the past year of probable unmarked graves near former residential school sites have ignited a national discussion over the long-lasting harms from the system, and prompted the Catholic Church to respond to its role in running the majority of the government-funded schools in a policy that lasted for more than a century.

More than 150,000 First Nations, Inuit and Métis children were taken from their families to attend residential schools in Canada. The stated goal of the schools was to separate children from their families and culture. The National Centre for Truth and Reconciliation has so far documented the deaths of more than 4,100 students, amid abuse, malnutrition, neglect and diseases such as tuberculosis.