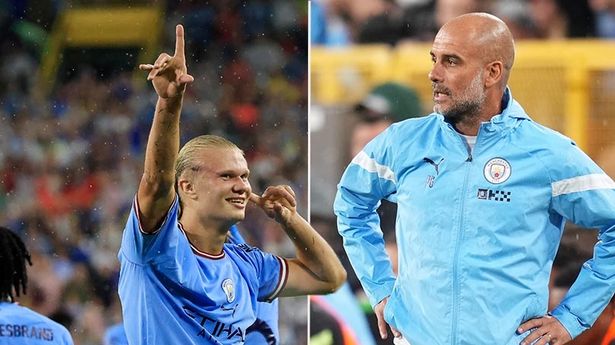 Haaland was speaking to the media after he made his debut for the Premier League champions.

The Norwegian netted the only goal as City beat Bayern Munich in a pre-season friendly on Sunday.

He had been left out of the opening tour game against Club America to build his fitness.

“It was a good feeling to get started again after six weeks without football,” Haaland said.

“I’ve been watching a lot of City games over the last years and they’ve been without a striker so, of course, I’ve been seeing myself in these situations. I’m not surprised I scored.

“It’s good. I have to say the first time winning against Bayern, it was about time after seven losses in a row.

“To beat Bayern feels good and the quality is good. It was a real test before Liverpool in a week.

“I don’t want to speak too much about Dortmund but Guardiola is a bit crazy – and I like that.

“I’ve been training well and I’m ready for what is next.”