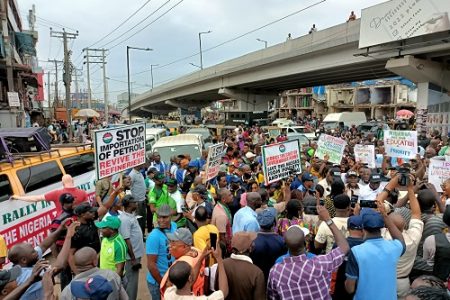 There was traffic congestion across the axes of Ikeja as members of the Nigeria Labour Congress kept to their promise and came out en masse in protest.

AF24NEWS also observed the heavy presence of security outfits at the rally. However, there has been no reports of abuse or maltreatment as the security forces are on the ground to prevent a breach or hijack of the protest by hoodlums.

The Congress had earlier promised to embark on a two-day protest, beginning on Tuesday, to express solidarity with the Academic Staff Union of Universities, ASUU, and other affiliate unions over the lingering industrial action in public universities in Nigeria.

On Tuesday, AF24NEWS confirmed that there was heavy traffic en route to Allen, Alade up to the Ikeja Under Bridge axis as NLC members bearing placards and banners held a rally at the Allen Bus Stop.

“We need to start putting pressure on the government to take our matters seriously. No one can understand how frustrating it is for a public university student to see their mates in private school graduating and becoming better in life while they are stagnant,” one commuter, Michael Okafor, told our correspondent.

“Even though there is a crowd here, I’m sure they will still be even more tomorrow as more people get the information,” he said.

In a circular sent to state councils of NLC by the national secretariat, NLC national president, Comrade Ayuba Wabba, had informed workers that the national days of protest was in support of unions in Nigeria’s public universities who are fighting for quality education.

“In line with the decisions of the National Executive Council (NEC) meeting of the Nigeria Labour Congress held on the 30th of June 2022, we have scheduled as follows the national days of protest to get our children back to school and support our unions in Nigeria’s public universities fighting for quality education.

“You are requested to immediately convene the meetings of your SAC to disseminate this information and to fully mobilize workers in the states for this very important protest for good governance,” Comrade Wabba said in the circular jointly signed by the NLC general secretary, Comrade Emmanuel Ugboaja.

AF24NEWS reports that on February 14, the Academic Staff Union of Universities commenced its ongoing strike on claims that the Federal Government failed to meet its demands.