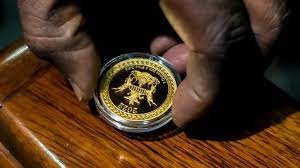 Southern African country, Zimbabwe has launched a gold coin to help curb the soaring inflation amid a slump in the country’s currency.

The world is currently battling with inflation rate, as the surge in food and fuel prices is raising pressure on governments across the globe. The disruption of the supply of oil and food commodities caused by the Russian-Ukraine war has no doubt contributed to the constant increase in the prices of food and fuel.

With no hope in sight, conditions are expected to deteriorate progressively. Reacting to the constant surge in inflation, Southern African country, Zimbabwe has launched a gold coin to help curb the soaring inflation amid a slump in the country’s currency.

The coin is called “Mosi-Oa-Tunya”, which means “The smoke which Thunders” and refers to Victoria falls, on the border between Zimbabwe and Zambia. Each coin will be priced at the International market rate for an ounce of gold plus 5% for production.

The move was announced last Monday by the country’s central bank, the Reserve Bank Of Zimbabwe, which disbursed 2,000 coins to commercial banks. The coins have been disclosed as a liquidity asset, which means that they will be capable of easily converting it to cash which can be used for trade both locally and internally, and also for transactional purposes in the country.

Holders of the Gold coin will be able to trade them for cash after 180 days from the date of purchase. Individuals and companies will be able to buy them from authorized outlets such as banks and keep them at a bank or take them home. While foreigners can only purchase the coins in foreign currency.

According to the governor of the Reserve Bank Of Zimbabwe, Mr. John Mangudya, he revealed that the first batch of the coin was minted outside of Zimbabwe, but they will later be produced in the country. He disclosed that the 22-carat gold coins can be used for purchases in shops, depending on whether the shop has enough change, as well as security for loans and credit facilities.

During the launch of the coin, the cost of one Mosi-Oa-Tunya was $1,824, after which the price will be determined by the international market.

Recall that Zimbabwe under the late Robert Mugabe who ruled for almost four decades plunged the nation’s economy into chaos. With the current inflation, coupled with its past economic woes, the country is hit by double jeopardy as authorities are doing everything possible to pull the country from the grip of economic chaos.

It might interest you to know that hyperinflation in 2009, forced the country to abandon its Zimbabwe dollar, as it opted to use the US dollar as its main currency. The local currency was later reintroduced a decade later but however lost its value again. The hope in the country’s currency is very low as many retailers do not accept it.

As inflation continues to bite hard, the International Monetary Fund, IMF has advised the central banks of each country to clamp down on the rising inflation rate. Zimbabwe obviously did not want to dilly-dally on such advice,as they have taken a huge step with the introduction of its gold currency (Mosi-Oa-Tunya) to curb rising inflation.

Last month, Zimbabwe’s inflation rate surged to 191% from 132% recorded in the previous month, which eroded the purchasing power of its citizens. However, with the introduction of its gold coin currency, some citizens have commended the move while some others have faulted it, stating that it will only favor those living above poverty level in the country.