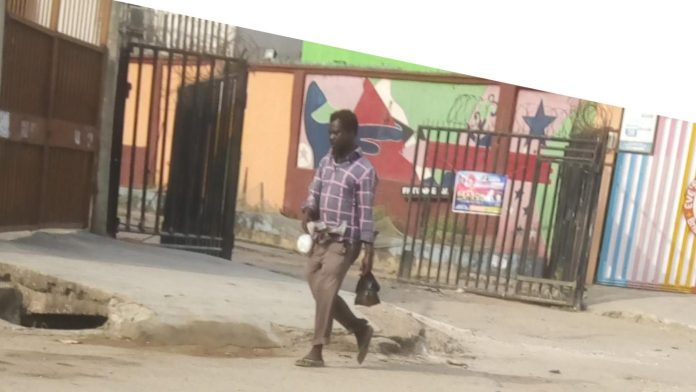 Most dreaded drug peddler in Ire-Akari area of Isolo Lagos has on Tuesday night been arrested by police officials attached to the area.

Earlier in April, AF24NEWS carried out an investigation on him  and reported that the disguising ‘lunatic’ deals in assorted narcotics inside his dirty nylon bags he carries during the day and evening hours. Some of these drugs include marijuana, codeine, Eskay (Skunk), colorado (synthetic cannabinoid), and molly (methylamphetamine or estarcy), among others.

After his arrest, his hideouts were also combed and his items were taken away with him.

AF24NEWS made videos of his arrest during the raid.

Looking at Michael, you will see lunacy written all over him – dirty dreadlocks, red eyes, cracked lips, rotten teeth with tattered clothes, roll-up sleeves, and a dirty piece of nylon tied around his waist to hold his trousers. He roams barefooted and often sits in front of Okeho Street opposite St. Mary’s Catholic Church.