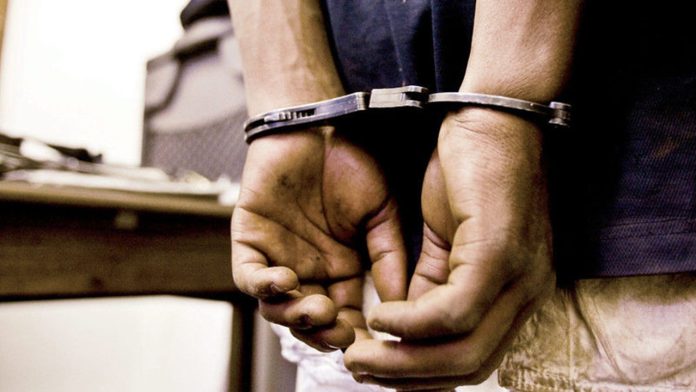 Michael, arrested peddler disguising as a mad person in Ire-Akari area of Isolo in Oshodi-Isolo Local Government Area has begun to confess the locations where he usually purchases his drugs from

He was arrested at about 8:15pm in front of a bar, near Kingston Joe while waiting for his customers.

Michael whose criminal activities were brought to light following investigations by this online newspaper, confessed that he had been into the business for at least ten years.

Residents who celebrated his arrest trouped to the station where he was being questioned to identify him and thank the officers from rescuing Ire-Akari and its environs from the over a decade prowling and carrying out unprintable nefarious vices.

During an interrogation session on Wednesday, according to details reaching AF24NEWS, Michael said, speaking in Yorùbá:

“I have been into drugs for over ten years, pretending to be bad.

The worth of illicit drugs found on me and in my hideouts were over ₦200,000, because I don’t really have stocks for now and people aren’t buying like before.”

Taking about location where he buys from, Michael mentioned Mushin.

“I always trek to Mushin to buy my drugs and I do smoke part of it too.

Meanwhile, on Tuesday, AF24NEWS gathered that police operatives on Tuesday afternoon stormed an abandoned building on Okeho Street where many commercial motorcycles where often seen.

Eyewitnesses said they were on mission to search out bandits and terrorists groups amid rising tensions and suspicion that terrorists were planning attacks in Lagos, Ogun State and other South West states.

It was learnt that the building was combed for nearly thirty five minutes but no dangerous weapons or devices were found.

Eight motorbikes and their owners were taken for Investigations.

In a similar development, Police officers in Lagos State swooped down on the Berger end boundary between Lagos and Ogun State.

Vehicles, commuters and motorists were subjected to rigorous search, as despatch riders operating along the axis were also scrutinised.

As they manned the border into the most populous Nigerian city, some passengers arrived the state in truck carrying livestock. Pedestrian were also ransacked while uncooperating residents and commuters where arrested and moved to the command for questioning.

Benjamin Hundeyin the Public Relations Officer of the Lagos Police Command, on Wednesday, while commenting on actions of security operatives in combing the nooks and crannies of the state for said officers won’t take chances at all as all hands are on deck to tackle terrorists threats.

Hundeyin said “The Lagos State Police Command is taking that intelligence report very seriously and the commissioner of Lagos State, CP Abiodun [Sylvester] Alabi has taken his DPO’s Area Commanders to task, mandating  them to ensure that nothing is left to chance within their respective domains or jurisdiction.

So we are fully in fully on top of our game. So, not just the DPO’s and Area Commanders, even Tactical Commanders, Intelligence Officers, everybody is fully on board on make sure that any possible attack does not succeed.”

At the Alagbado area which is another boundary between Lagos and Ogun State, residents claim that patrol teams only moved around the area.

“We don’t have big forests where bandits can hide for about a month, two or three in this place but everyone is on guard, and not type of attack can really happen” Babalakin Idowu told newsmen.

Alfa Ibrahim Àjàyí said “the security actions must also be done by residents in order to help matters.”