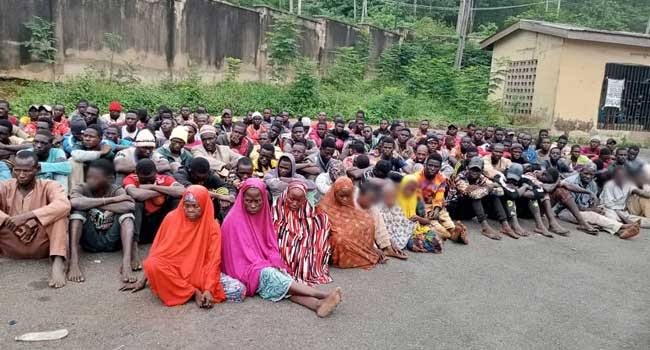 The police in Oyo State say the 147 passengers aboard a truck from Zamfara and intercepted in Oyo State on Tuesday were “predominantly farmers and traders” heading to Ogun State.

Adewale Osifeso, the police spokesperson in the state, said in a statement in Ibadan on Wednesday that the command will continue to maintain a proactive stance towards ensuring that the lives and property of the people are properly secured.

He said solid communal partnerships with stakeholders, confidence-building patrols, and technology-infused surveillance duties are among the strategies amassed toward comprehensive security provisions for the residents and guests of the state.

The statement said the Commissioner of Police, Adebowale Williams, warned against spreading falsehood and unverified information capable of creating unnecessary panic amongst residents.

He also advised the media and public against spreading false information about the 140 passengers arrested in Ibadan.

The News Agency of Nigeria (NAN) reports that a truck was intercepted on Tuesday with 147 passengers on the Iyana Bodija – Iso Pako road in Ibadan and handed over to the Amotekun and police.

”Preliminary investigations revealed that the truck and its passengers, who are predominantly farmers and traders, were heading to Ogere, Ogun State from Kaura Namoda, Zamfara.

“The truck was thoroughly searched and its passengers profiled by a combined team of the Police, men of the Department of State Services, and Western Nigeria Security Network, Codenamed “Amotekun” to eliminate possibilities of ferrying escapees from any recorded jailbreaks within the country.

“The search revealed that the truck was conveying eight motorcycles and bags of beans and onions to be dropped off with their owners at the Bodija Market.

“Upon the conclusion of the process, the truck and its passengers were escorted out of the state and have since been handed over and received by security operatives in Ogun,” he said.

Fear of an attack by terrorists, who had already struck several times in the federal capital, Abuja, has been gradually spreading across South-west Nigeria.

The fear came after rumours of infiltration of the terrorists into forests in the region emerged on social media last week.

On Sunday, the police in Lagos said their officers had been placed on alert following reports of a planned attack by gunmen from border communities.

On Tuesday, Ekiti and Kwara states agreed to take joint responsibility for monitoring the security situation in their boundary towns following threats in the areas.