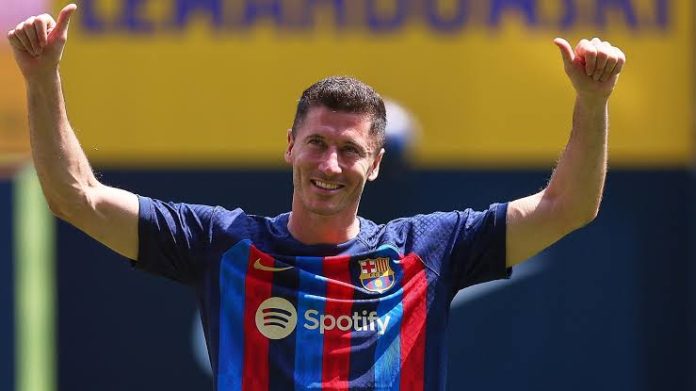 Polish striker, Robert Lewandowski, has been unveiled to the Barcelona fans at the Camp Nou on Friday.

Lewandowski was presented as Barcelona’s new No.9 following his €50 million (£42m/$51m) transfer from Bayern Munich.

The European highest goal scorer has inherited the iconic jersey from Memphis Depay, who has been linked with a Camp Nou exit following Lewandowski’s transfer.

Lewandowski turns 34 later this month but dismissed any suggestion that his best years are behind him at his first press conference at Barca’s stadium on Thursday, even though he didn’t hit the net for the club in pre-season.

“I think my age is not important right now, it’s just a number. I feel better than when I was 29,” he said.

He added, “I know that Barcelona was not going through an easy time, but when I spoke with Joan and heard about the project and the way they wanted to follow, I thought that the best thing was to make the jump to Barcelona.”

He also spoke on the rivalry with La Liga champions Real Madrid.

"I am always ready to play #ElClásico"

“I’m not thinking about Real Madrid or Benzema, he’s an extraordinary striker, but for me, the most important thing is to win with Barcelona, not to beat him,” he said.