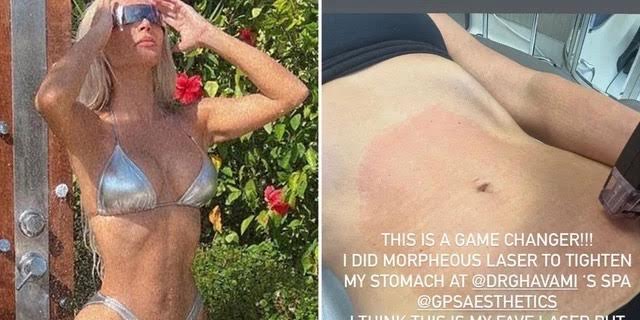 Have you ever admired Kim Kardashian’s flat stomach with envy? Alert: It could not be entirely natural.

Kim Kardashian, the 41-year-old model and member of the Kardashian family, released a photo and a comment on her Instagram story that revealed her redden stomach “This alters everything. I used Morpheus to flatten my stomach. This is probably my favorite laser, but it hurts “She composed.

A “Morpheus laser,” sometimes known as Morpheus 8, is the laser process. It is a non-invasive needling procedure. Although this laser does not aid in belly fat loss, it does tighten the stomach and prevent it from sagging. It also remodels and contours the body.

Why this matters
The Kardashian-Jenner family are seen as the pinnacle of beauty and style but their body and beauty may be unattainable to the average woman.

Though she was not open about the cosmetic procedures and plastic surgeries she had in the past, she is now more open about talking about them.

She told Allure Magazine that she never did botox but admitted that she had fillers on her forehead but not on her lips or cheeks.
She also told Allure how she is obsessed with looking good.
“I really, genuinely care about looking good. I probably care more than 90 per cent of the people on this planet. It’s not easy when you’re a mom and you’re exhausted at the end of the day or you’re in school, and I’m all of the above.”
“I do my beauty treatments usually late at night. After everyone’s in bed, I’m doing laser treatments,’ she said.
Looking good never comes so easy.