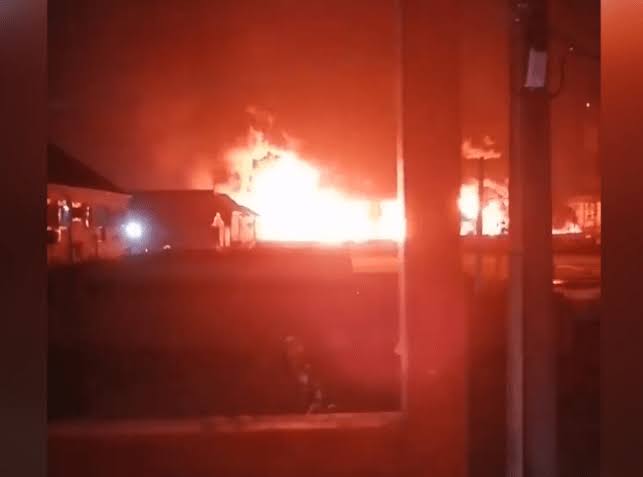 Traders at the popular Warri Miller Waterside, close to the Nigeria Ports Authority in the Warri South Local Government Area of Delta State, have begun to count their losses following a fire incident in the market.

This was as they called on the state government and relevant security agencies to take urgent action to unravel the mystery behind the incessant fire incidents at the market.

The market was gutted by fire on Wednesday night during which goods and property worth millions of naira were destroyed.

Witnesses said many houses and properties were destroyed in the fire disaster, adding that the inferno raged for several hours before the intervention of fire fighters from the State Fire Service.

It was the second time within this year the popular Warri Miller Waterside was hit by fire disasters.

Most of the affected traders and shop owners were thrown into confusion as they counted their losses and tried to salvage what was left.

One of the affected shop owners, who identified himself as Lazarus Mbanefo, stated that he lost goods worth N5million to the inferno while lamenting how he would restart his life.

Another trader, who simply called herself Mama Ngozi, told newsmen that she just equipped her shop and everything went up in flames.

A cross section of the traders appealed to the state government and relevant security agencies to take action to prevent another repeat.

Although the cause of Wednesday night’s fire had yet to be ascertained as of the time of filing this report, some traders blamed the periodic fire incidents at the Miller Waterside on the activities of illegal oil bunkers.

Consequently, they want the state government and relevant security agencies to take action to prevent a recurrence.

Also, residents of the area who spoke with newsmen called on the government to urgently swing into action by probing deep into the root causes of the recurring fire incident.

The police public relations officer for the Delta State Police Command, DSP Bright Edafe, could not be reached for comments on the inferno.