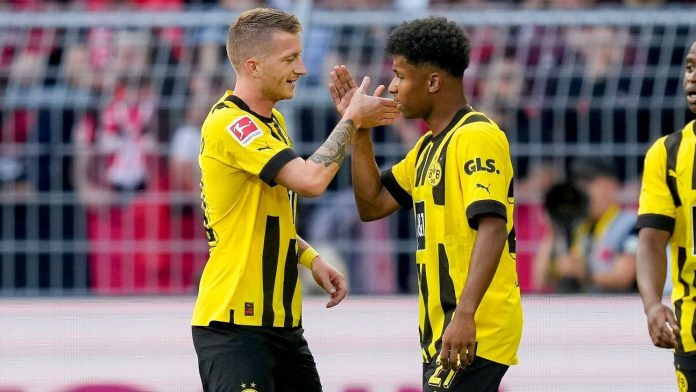 Borussia Dortmund fought hard to seal an opening day victory as opponents Bayer Leverkusen ended the game with an outfield player in goal.

Dortmund took the lead in under 10 minutes as Marco Reus bundled the ball over the line from close range after some excellent pressing from Jude Bellingham, who had won the ball back high up the pitch.

Just two minutes later, Leverkusen suffered another blow as Gerardo Seoane was forced to replace Robert Andrich with Charles Aránguiz after the midfielder suffered an injury.

The game was fairly open as the two sides went in at the break, but not long after the restart, Leverkusen’s Lukáš Hrádecký made an excellent save from point-blank range.

And it was the visitors who had the ball in the back of the net next when Exequiel Palacios headed home, but the attempt was very quickly ruled out for offside.

Patrik Schick was testing Gregor Kobel with increasing frequency and could’ve scored in the 68th minute. However, he hit his shot straight at the goalkeeper.

In the dying minutes of the match, Hrádecký was sent off for handling the ball outside his area, and defender Edmond Tapsoba had to go in goal to keep out the resulting free-kick, which was blazed over by Reus.