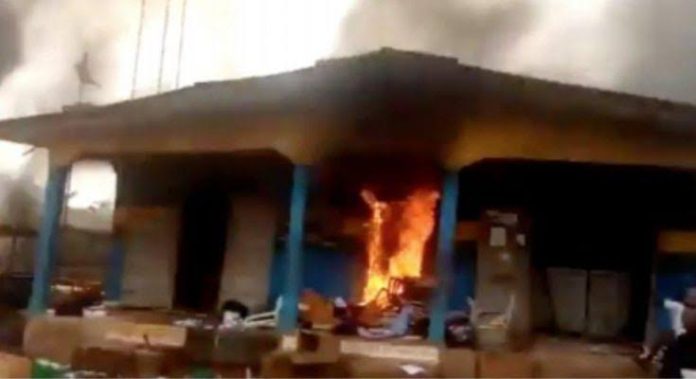 The Imo State Police Command has accused the members of the proscribed Indigenous People of Biafra and its militia affiliate, Eastern Security Network of the attack on Agwa Police Station at about 11 pm on Friday.

The police spokesperson, Micheal Abattam while confirming the attack, disclosed that two suspects in custody escaped, while one rifle was recovered.

The statement reads, “The hoodlums who came in two vehicles and a tipper, shooting sporadically, used a tipper vehicle in forcing the gate open to gain entrance into the station, throwing Improvised Explosives Devices (IEDS) and petrol bombs.

“The police operatives of the division joined by the Command’s Tactical Teams gave the hoodlums a stiff resistance, engaging them in a gun duel. The hoodlums who were fatally hit with a lot of casualties on their side, retreated, escaping in their vehicles.

“The fire which affected a parked private car and some motorcycles was later put off, preventing it from causing more damages. Fortunately, the building was not affected.

“In the attack, two suspects in custody escaped, four police officers gallantly paid the supreme price, while one rifle is yet to be recovered. Meanwhile, the area has been fortified with enough police operatives”.

Abattam stated that the Commissioner of Police, Imo State, CP Mohammed Ahmed Barde went to the scene on confidence-building patrol and assessment of the incident, and also paid a visit to the community leader, HRH Eze (Dr) I. O Asor.

“He (CP Barde) assured the Command’s commitment to ensuring that peace is restored and that the Command will leave no stone unturned until the perpetrators of the dastardly act are arrested and made to face the full wrath of the law.

“He then enjoined them to report any person seen treating bullet wounds or hiding within their communities to the nearest police station or call the Command’s emergency control room numbers 08034773600 or 08098880197”, the statement added.