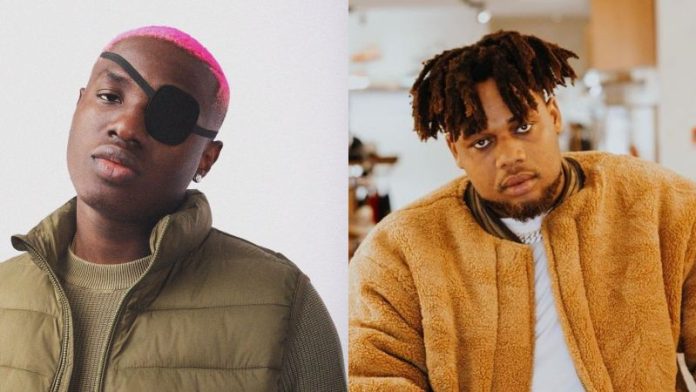 Buju and Ruger had in July been embroiled in a scrap that has now resurfaced.

Nigerian artistes Michael Adebayo Olayinka, popularly known as Ruger, and Daniel Benson (BNXN fka Buju) have on Thursday continued to clash in their ongoing beef as the former stocked the fire with a pointed tweet.

The pair’s entire squabble began when fans asked ‘Dior’ singer Ruger why he thought he was a better artiste than BNXN fka Buju.

Ruger renewed interest in the pair’s dispute on Thursday when tweeted that the ‘For Days’ crooner should ‘get a solo hit’ before talking to him, fat-shaming him in the process.

Get a solo hit then talk to me fatty bum bum

Fans on social media were left agog in anticipation of response and shortly after, Benson had said,” Project #1 and I didn’t have to whine my waist”, trolling Ruger’s preferred performance style.

Man had to body shame? 😞💀 hurt him deeeeep 😂

The beef began in July when Ruger was conducting a question and answer session with his fans. One fan had asked him why he thought he was better than Buju

Ruger, irked by the question, shot down the fan’s insinuation by saying that Buju is not on his level.

He had tweeted in July: “I love Buju; he’s good but he’s not better than me. Everything I have done since the beginning was only RUGER. All my hits are JUST RUGER. I’m always proud going on stage around the world with my own hits and everyone is singing along. You see the difference?”

In response to Ruger’s claim, Buju warned Ruger to “respect him”, hitting back that while it is true that he’s one of the most featured artistes in the industry, he has never paid anyone to dance or trend his songs as Ruger does.

Buju had said, “’Sorry I’m Late’ is still above two of your music projects on Apple music. You had to drop deluxe for one and you think you have anything on me? You are owing your boss money and you are talking to a boss.

“I have never begged for a feature because even the legends that you respect rate me and my music above yours. Don’t hate the player, hate the game,” he added.

Buju earlier announced that he was releasing his sophomore EP project Bad Since ’97, where he features heavy hitters like rapper Olamide and legendary vocalist Wande Coal.

Listen to the EP here: