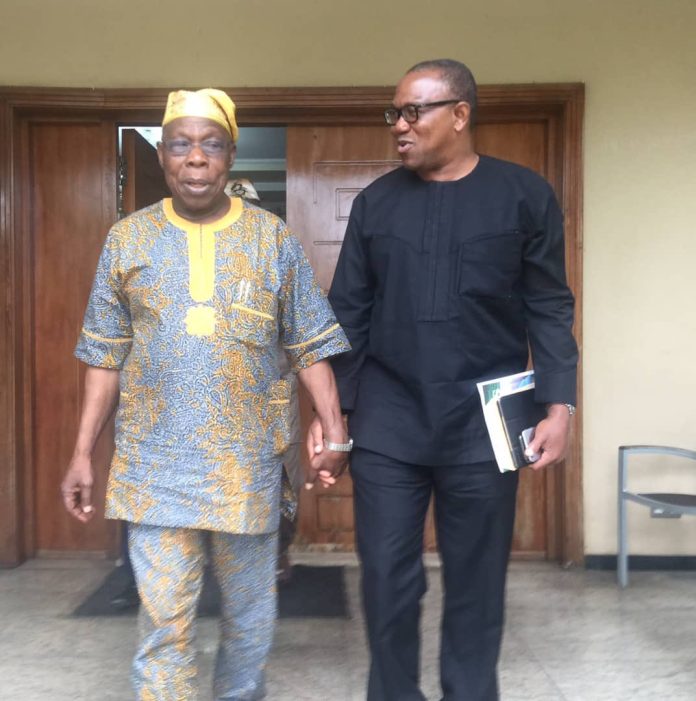 “You know Obasanjo; if he believes in something, he works for it. His presence at the meeting was to convince Wike to support Obi. He believes the Labour Party’s presidential candidate is competent.”

The Peoples Democratic Party’s presidential candidate, former Vice-President Atiku Abubakar, on Thursday met with the Rivers State Governor, Nyesom Wike, in London as part of efforts to resolve the crisis with the governor.

The Punch reported that Atiku was pleading with Wike to support him in the 2023 presidential election. This is as a close associate of the governor disclosed that the former Vice-President had no alternative but to agree to meet all of the demands of Gov Wike.

Earlier on Thursday in London, the United Kingdom, former President Olusegun Obasanjo met Wike in a move aimed at building broad support for the aspiration of the Labour Party’s presidential candidate, Peter Obi.

Besides Wike and Obi, allies of the Rivers State governor, including governors Seyi Makinde of Oyo State; Samuel Ortom of Benue State; Okezie Ikpeazu of Abia State and former Cross River State Governor, Donald Duke, were also at the meeting.

The relationship between Atiku and Wike worsened a few months ago after the PDP presidential primary, which was won by the former Vice-President.

Atiku reportedly shunned the recommendation of a PDP committee, which recommended Wike, who came second at the presidential primary, as the running mate.

Although the PDP set up a panel to reconcile the two men, Wike insisted on the removal of the party’s Chairman, Iyorchia Ayu.

The meeting of the peace committee comprising loyalists of Wike and Atiku ended in a deadlock in Port Harcourt on Friday as the former Vice-President’s men did not grant the request of the governor that Ayu should be removed.

It was also gathered that Atiku’s delegation rejected a demand that the PDP presidential candidate should serve one term if elected.

A highly reliable source at the meeting between Atiku and Wike in London, said the Adamawa State Governor, Ahmadu Fintri, accompanied the former Vice-President to the meeting.

Although the source did not specify Wike’s requests, he said Atiku had agreed to meet all the demands of the governor.

The source stated, “He (Atiku) has agreed to meet all demands. He will sign an undertaking on all the agreements. Once he is able to meet them, the Wike group is ready to work with him. The details will be made known.”

Earlier on Thursday, it was gathered that the associates of the Rivers governor expressed their preferences for the All Progressives Congress presidential candidate, Bola Tinubu, over Obi.

Meanwhile, Wike and the ex-Lagos State governor had met in London on Monday.

The former APC running mate placeholder, Ibrahim Masari, on Wednesday confirmed that Tinubu met Wike, adding that they would continue to meet in due course.

“The meeting was basically on the 2023 presidential election and by God’s grace, we are going to work with Governor Nyesom Wike. He will assist and we are going to win the election with ease, by the will of God,’’ he told the BBC Hausa from London.

Wike’s meeting
According to him, Wike does not have to leave the Peoples Democratic Party before working for Tinubu.

Tinubu, who had come under heavy criticism over his preference for a Muslim-Muslim ticket, is seeking to bolster his chances at the February 28 presidential poll by luring Wike to his camp.

Confirming the meeting between Obasanjo and Wike on Thursday, a member of the Rivers governor’s camp, who spoke on condition of anonymity because he was not authorised to speak to the press on the matter, disclosed that the meeting was about the 2023 presidential election.

When askded if there was a possibility of an Obi/Wike alliance, the source said, “Obasanjo is working on that, but many of us (Wike’s camp) prefer Tinubu.”

Another close associate of the Rivers State governor, who spoke l with The Punch, said Obasanjo hinged his support for Obi on the need for the South-East to produce the next president.

The source, who was privy to what happened at the meeting with Obi, stated, “You know Obasanjo; if he believes in something, he works for it. His presence at the meeting was to convince Wike to support Obi. He believes the Labour Party’s presidential candidate is competent.”

The Spokesperson for the Peter Obi Support Network, Onwuasoanya Jones, confirmed the meeting.

He said, “I can confirm that Peter Obi met with these PDP governors and our former President, His Excellency Chief Olusegun Obasanjo, in London and I can tell you that this is one out of several such meetings that have been held and will still be held as we approach the 2023 elections.

“Of course, the discussion is centred on salvaging our dear country from an imminent collapse, and there is a consensus among Nigerian patriots that Peter Obi is the most reliable of the candidates to drive this vision.”

Meanwhile, the National Vice Chairman (South-East) of the APC, Dr Ijeomah Arodiogbu, on Thursday expressed optimism that former Minister of Transportation, Rotimi Amaechi, would have no option but to work with Wike if he agreed to defect to the APC.

Arodiogbu disclosed that Amaechi must learn to leave his past behind him and be willing to accommodate his perennial foe for the sake of the party’s presidential candidate.

Speaking to The PUNCH on Thursday, the APC national vice-chairman for South-East recalled that both Amaechi and Wike were close friends from university days before their political differences.

Amaechi’s options
He said, “I don’t think it (Wike’s coming) will push Amaechi out of the party. Instead, it should unite both friends in the same cause, especially if both of them, one way or the other, are convinced that our presidential candidate will emerge victorious. Because the Wike I know will not engage in any meeting with Tinubu if he does not see the possibility of Tinubu emerging as the President. Nobody wants to belong to the losing camp.

“I see the possibility of them (Amaechi and Wike) working together since both of them believe that Tinubu will be the next President of Nigeria. They were friends and I believe that if they have the room to work together, they will not hesitate.”

A former Minister of Communication, Adebayo Shittu, does not share the same opinion.

Shittu declared that Amaechi had shown nothing but resentment and a lukewarm attitude towards Tinubu.

The director general of Asiwaju Tinubu-Shettima Coalition for Good Governance believes that Wike’s coming to the APC will inevitably displace and relegate Amaechi.

“He has been very lukewarm, hoping that a miracle will turn things in his favour. If it eventually happens (defection), Wike will push him aside and we all know that he is smart.

“Wike is currently busy playing psychological warfare against the PDP and leaving them to second guess if he will leave the party or not. His mission is simply vendetta against the PDP, just to ensure they lose votes to teach them a lesson,” he stated.

Shittu’s position was also shared by a former Deputy Spokesman for the APC, Yekini Nabena, who maintained that what Wike was doing was not different from what Amaechi did when he left his old party with other members of the nPDP (New PDP).

According to him, politics dwells largely on numbers, interests and negotiations devoid of emotion.

He stated, “Politics is all about negotiation. Once the big people come in, some other people will take the back seat. You know what happened in Rivers State when the governor came in, people took the back seat. You cannot have a sitting governor and someone else will become a leader.

“It is the way Amaechi built his system. We are beginning to see the Wike’s side and have not seen much of Amaechi. Maybe he has a game plan we don’t know but everything will play out at the appropriate time.”

But a chieftain of the APC in Rivers State, Chief Chukwuemeka Eze, in an interview with The PUNCH, said it was surprising for anyone to accuse Amaechi of not supporting Tinubu.

Eze, who was reacting to the accusation that Amaechi had been lukewarm to Tinubu’s presidential campaign, said the former minister congratulated the presidential candidate and promised to support him in the 2023 election.

Also on Thursday, three months after the APC presidential primary which was won by Tinubu, Vice President Yemi Osinbajo, Amaechi and 20 other aspirants are expected to meet again in Abuja on August 31.

A statement issued on Thursday by the media team of the APC youngest aspirant, Dr Nicolas Felix, disclosed that virtually all the aspirants who participated in the last presidential convention would converge on Abuja next week.

The statement partly disclosed, “The special invitation to the strategic meeting of all 2023 APC Presidential Aspirants, which will be held at Transcorp Hilton in Abuja, on Wednesday, August 31, 2022, by 2 pm is to brainstorm on adopting winning campaign strategies that will carry every Nigerian along and address the challenges bedevilling our country.”

Those expected at the parley also include a former Science and Technology Minister, Ogbonnaya Onu; former Minister of State for Education, Chukwuemeka Nwajiuba and ex-Minister of Niger Delta Affairs, Godswill Akpabio.

The aspirants ’ last outing together was the APC Presidential primary which was held at Eagle Square from June 7 to 10.

Atiku advises supporters
Meanwhile, the PDP presidential candidate has called on all stakeholders of the party and his supporters to desist from making statements that were capable of compromising the ongoing reconciliation process.

According to him, such reconciliation would further strengthen the party and bring all its leaders together.

The former Vice President said these in a statement signed by his Media Adviser, Paul Ibe, in Abuja, on Thursday.

He said, “It has become imperative to appeal to all party members, leaders and everyone related to, connected with or associated with the presidential candidate of the PDP, Atiku Abubakar, to desist from making comments that potentially reduce the optics of PDP’s image as a united political party.

“This appeal becomes necessary in order to call the attention of party leaders and members to the diversionary antics of the ruling All Progressives Congress which, in manufacturing a false impression of division within the PDP, aims to hoodwink the Nigerian public to overlook the monumental failures of the ruling party.’’

“Today, Nigerians look up to the Peoples Democratic Party to lead the charge in ousting the ruling party. This expectation from the people is the reason why the APC is jittery about their impending fall in next year’s general elections. It is also the very reason why the ruling party is manipulating the political process to create a sense of division in the PDP.

“Because they know that there is nothing to campaign with from their records of performance in office, the APC has elected to play the role of the devil’s advocate, regaling in celebration of their imaginary invincibility upon a fraudulent claim that the PDP is divided.

“It is for this reason for the appeal to every true member of the PDP and anyone who truly wishes the success of the PDP presidential candidate to not fall for the antics of the APC in making statements that could give credence to the false claim of divisions in the PDP.

“All the leaders of the party, including especially the governor of Rivers State, His Excellency Nyesom Wike, and all governors of the PDP are united in working for the victory of the PDP in next year’s general elections across the board.