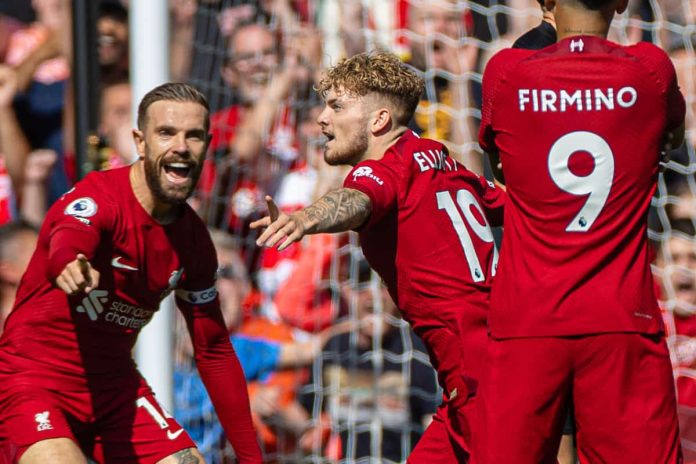 Liverpool equalled the Premier League’s record win as they crushed sorry Bournemouth 9-0 at Anfield to claim their first victory of the season.

Jurgen Klopp’s side had gone into the game facing pointed questions about a team depleted by injuries following a 2-1 loss to Manchester United on Monday.

But those questions were answered in remarkable fashion against Scott Parker’s side as they scored twice in the opening six minutes and five times in the first half.

Luis Diaz opened the scoring with a fine header before Harvey Elliott found the net for the first time in the Premier League. Trent Alexander-Arnold answered critics of his performance at Old Trafford with a spectacular strike before Roberto Firmino capped a three-assist first half with a goal and Virgil van Dijk headed in the fifth.

Chris Mepham’s own goal continued the rout after the restart, while Firmino and Diaz each doubled their tallies either side of a Fabio Carvalho goal to make Premier League history.

Diaz found the top-right corner with a powerful header back across goal from Firmino’s cross, and Elliott produced both placement and power to bend into the bottom-left corner from the edge of the area.

Mohamed Salah twice saw gilt-edged chances go begging, turning wide at the end of an intricate move involving Diaz, Firmino and Elliott before his close-range volley was turned over by Mark Travers.

Yet Travers was helpless to deny Alexander-Arnold as he rifled a scorching long-range strike into the top-left corner and he was soon picking the ball out of his net once more when the excellent Firmino volleyed in after Salah’s pass was deflected into his path.

There was yet more first-half pain for Bournemouth, which came courtesy of Van Dijk, whose towering header from Andrew Robertson’s corner made it 5-0.

Bournemouth’s day was encapsulated under 60 seconds into the second half when Mepham turned into his own net under pressure from Diaz, who was in an offside position.

Firmino prodded in after Travers spilled Robertson’s cross, with Carvalho then getting in the on the act with a volley and Diaz tying the record through a header from a near-post corner.