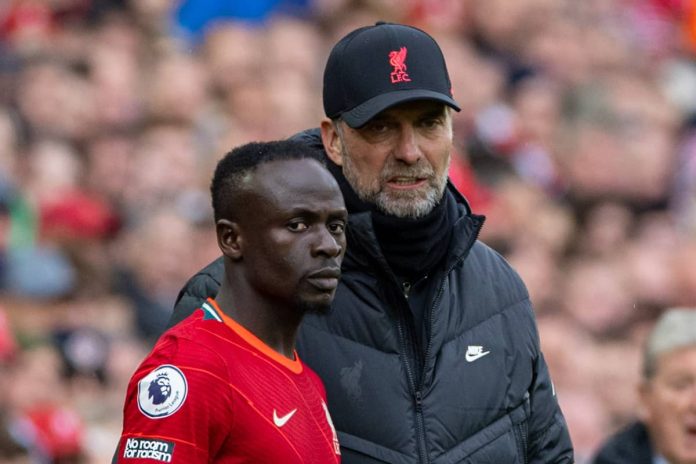 Jurgen Klopp has called Sadio Mane “the national hero in Senegal” in heartwarming message to his former Liverpool player.

Mane, 30, left Merseyside to join Bayern Munich earlier this summer. It’s proven to be a wise decision by the Senegal international, who’s scored four goals in as many games to help Bayern enjoy a perfect start to the season, winning the DFL-Supercup along the wat.

But Liverpool have struggled since Mane’s exit. Although they defeated Manchester City 3-1 to win the Community Shield, they’ve picked up just two points from their opening three Premier League games – losing 2-1 to Manchester United in their most recent fixture.

Despite losing one of his best players to a Champions League rival, Klopp isn’t holding a grudge. “He has a huge heart for his homeland, building schools and hospitals locally for good reasons,” he told the Bundesliga’s YouTube channel. “It’s an incredible story, how he even got started with football. [He’s] a really great guy.”

Klopp went on to highlight Mane’s reputation in his homeland. The talismanic star led Senegal to their maiden Africa Cup of Nations (AFCON) title in February and World Cup qualification the next month. “Sadio is the national hero in Senegal,” added Klopp.

“Winning the Africa Cup [AFCON], Player of the Tournament, Africa’s Men’s Player of the Year, scored the decisive penalty [in the AFCON final] and other vital goals. Right now, he could probably become president there if he

Mane was shown a video clip of Klopp’s praise and was pleased to hear his kind words. “No, it’s just a compliment from him,” he laughed in response.

Mane was also keen to laud his former manager. “Since I joined him in Liverpool, I developed – first of all – as a human being, of course, and as a player under him,” he said. “I’ve always said that I was lucky to be his player and be coached by him.”

Klopp knows Liverpool must get their first Premier League win of the season on Saturday afternoon if they’re to reignite their title challenge. They face Bournemouth at Anfield. The Reds are currently seven points behind early leaders Arsenal.

Klopp and his players had a ‘special meeting’ on Wednesday to discuss their poor start to the Premier League season. “It’s more [getting things] off my chest!” said Klopp on Friday. “The good thing about these meetings is that I feel much better after them!

“It’s not that I shout at the players, not at all, it’s about putting things in perspective, talking about the stuff we did well, the stuff we did not-well, these kind of things… in the end only one thing is important: what we really think ourselves about it.”