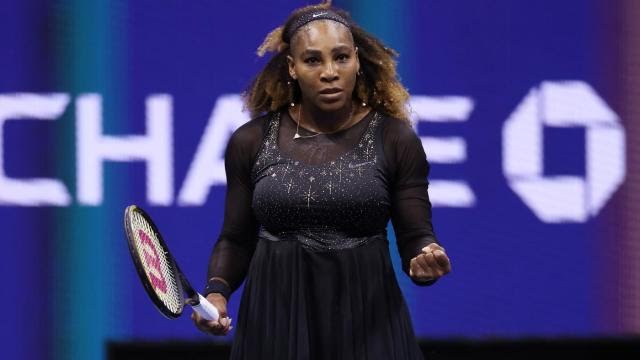 Serena Williams roared into the third round of the US Open on Wednesday, overpowering second seed Anett Kontaveit with a battling performance to extend her Grand Slam singles career in dramatic fashion.

The 40-year-old tennis icon – who has signalled she plans to retire after the tournament – drew on all her reserves of resilience and sheer fighting spirit to take down Kontaveit with a 7-6 (7/4), 2-6, 6-2 at an electric Arthur Ashe Stadium.

Kontaveit appeared to have gained the upper hand over the 23-time Grand Slam singles champion after levelling the match at 1-1 with a dominant second set display.

But Williams showed her champion’s mentality to yank back momentum in the decider, breaking Kontaveit twice before closing out victory to leave a sell-out crowd featuring the likes of golf superstar Tiger Woods on its feet.

“You know this is what I do best,” a delighted Williams said after her win.

“I love a challenge and love rising to the challenge. I haven’t played many matches but I’ve been practicing really well and my last few matches it just wasn’t coming together…But the last couple of matches here in New York it’s really come together.”

Williams admitted she had feared the worst after she was unable to respond as Kontaveit upped her game to take the second set.

“I thought ‘Oh my goodness, I’ve got to give my best effort because this could be it,” Williams said. “I just wanted to keep trying and see what I could do and do my best.”

Williams, who won the first of her Grand Slam singles titles as a 17-year-old at the US Open in 1999, said she was now playing with no pressure with the finish line of her remarkable career in sight.

Williams will return to Arthur Ashe on Thursday to take part in the women’s doubles, where she will reunite with elder sister Venus for the first time since 2018.

Kontaveit meanwhile admitted she had been rattled by a ferociously partisan New York crowd.

“I expected it but it was really hard,” Kontaveit said. “I knew it was coming. It was something I’d never experienced before.”

Serena’s victory once again stole the show on day three of the tournament.

The 21-year-old had never been past the second round of a Grand Slam tournament before, but uncorked 35 winners while saving 12 of 17 break points to secure her win.

Wang, ranked 75th in the world, has happy memories of New York, having won the junior US Open title at the venue in 2018.

Elsewhere, Tunisia’s beaten Wimbledon finalist Ons Jabeur sailed into the last 32 with a 7-5, 6-2 win over Elizabeth Mandlik of the United States.

The USA’s 12th-seeded Coco Gauff, meanwhile, advanced to the third round with a 6-2, 7-6 (7/4) win over unseeded Romanian Elena Gabriela Ruse.

Wu became the first Chinese man in 63 years to win a singles match at a Grand Slam when he knocked 31st seed Nikoloz Basilashvili out of the tournament on Monday, and followed it up on Wednesday with an epic five-set win over fellow qualifier Nuno Borges of Portugal.

In other men’s matches, 2012 champion Andy Murray advanced to the third round for the first time in six years with a four-set win over American wildcard Emilio Nava.

“Physically this is the best I’ve felt in the last few years,” said Murray.

He also complained to the umpire that he could smell marijuana smoke in the crowd.