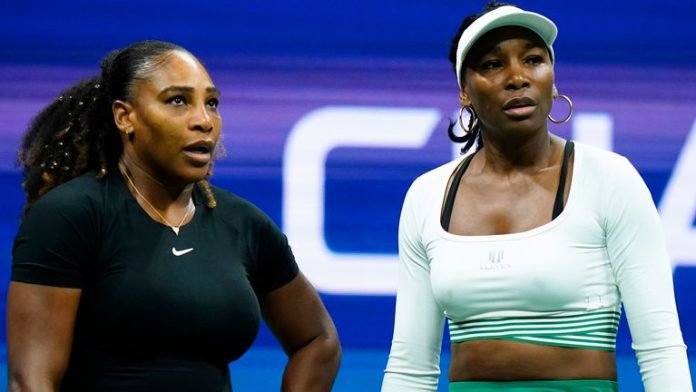 Serena and Venus Williams’ glittering Grand Slam doubles career was brought to an abrupt end at the US Open on Thursday as the reunited sisters crashed out in the first round against Czech duo Lucie Hradecka and Linda Noskova.

The Williams sisters — in what is almost certainly their final outing together as a Grand Slam doubles duo — slumped to a 7-6 (7/5), 6-4 loss at the Arthur Ashe Stadium.

The American pair – winners of 14 Grand Slam crowns and three Olympic gold medals — had not played together in a doubles tournament since 2018.

But they were handed a wild card into the draw for this year’s US Open just weeks after Serena indicated she planned to retire following the tournament.

On Wednesday, Serena kept her US Open singles campaign alive with a roller coaster, never-say-die performance, sending the Arthur Ashe faithful into raptures on a night of high drama.

But there was a more subdued atmosphere on Thursday as the two sisters took centre-stage together to open the night session.

While Serena showed flashes of the sort of brilliance that has studded her singles performances this week, elder sister Venus struggled to find her best form against the Czech duo.

READ ALSO:Serena Williams powers into US Open third round

The Williams sisters were unable to take advantage of two opportunities to gain a crucial service break in the first set, and paid the price as Hradecka and Noskova clinched the tie break.

Buoyed by their opening set performance, the Czechs scored an early break in the second and were soon 4-1 ahead with victory beckoning.

The Williams’ were determined not to go down without a fight however and after holding serve dug out a service break and held again to level at 4-4.

But hopes of an epic comeback were snuffed out rapidly with Noskova comfortably holding serve for a 5-4 lead.

The Czech duo then took three match points at 0-40 on Serena’s serve, converting on the second opportunity to clinch victory.