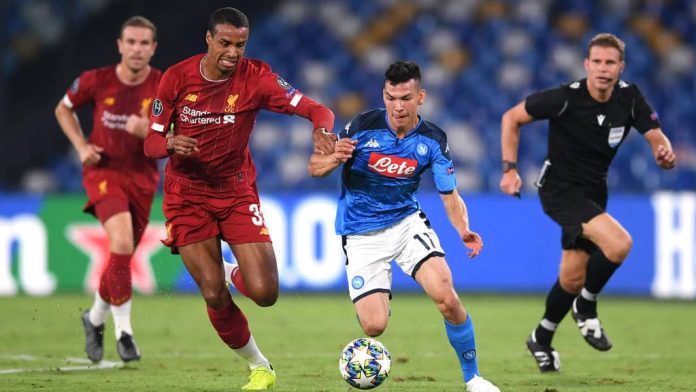 Napoli extended their unbeaten run in style at Stadio Diego Armando Maradona as Luciano Spalletti’s side struck three times in the first half to hand Liverpool an embarrassing 4-1 defeat in their Champions League opener in Group A.

Within three minutes, the Partenopei were awarded a penalty by referee Carlos del Cerro Grande after James Milner handled Matteo Politano’s shot inside the area. Piotr Zielinski stepped up to bury the resulting spot-kick beyond Alisson and into the bottom-left corner to put his side 1-0 up.
Ad

Then, just 12 minutes later, Napoli had another penalty to Liverpool’s horror, as Virgil Van Dijk was adjudged to have fouled Victor Osimhen in the box after a VAR check on the pitchside monitor. Osimhen opted to also take the penalty that he won for his team, but the Nigerian’s effort was saved well by Alisson.

Napoli made amends and doubled their lead right on the half-hour mark, as Andre-Frank Zambo Anguissa finished well from inside the box following a neat give-and-go with Zielinski.

Moments after coming on as a substitute, Giovanni Simeone – the son of Diego – got in on the act right on the stroke of half-time, as he tapped in Khvicha Kvaratskhelia’s cut-back after brilliant work from the Georgian down the left to put his side three goals to the good.

Liverpool were then dealt yet another blow just two minutes after the restart, as Zielinski had his brace. The Polish international’s initial shot from inside the box was saved by Alisson, but he easily placed the rebound into the net from close range.

Jurgen Klopp’s side hit back right away, as Luis Diaz curled a shot into the bottom-right corner from just inside the area, but it only proved to be a consolation as Liverpool had to settle for a humbling defeat.