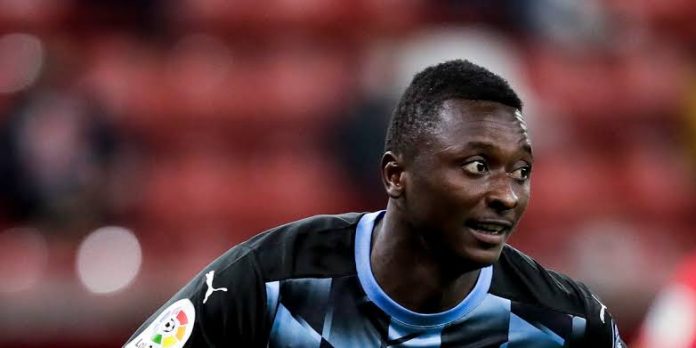 After scoring on his debut for Real Sociedad, Super Eagles striker, Umar Sadiq will be leading the line for Real Sociedad when they face Manchester United at the Old Trafford on Thursday night in the Europa League.

Sadiq completed a deadline day transfer from UD Almeria to the Anoeta for a fee of 20million and has not hesitated to hit the ground running, scoring on his debut for the La Real.

Before joining Real Sociedad, Sadiq has been one of the hotshots in Spain, scoring 41 goals in the two seasons he spent at Almeria. And already this season, the 25-year-old forward has three goals in three consecutive games.

Manchester United would, however, be coming into the tie the better of the two sides on form, having won four games in a row include a confidence-boosting win against Arsenal at the weekend.

Ten Hag, after his first two loss of the season, seems to have his acts together, pumping life back into the red side of Manchester.

They will be looking at extending their perfect winning streak to the Europa league as they launch their campaign for a European silverware.

However, having been drawn alongside Omonia and Sherrif Tiraspol, the Red Devils know that their biggest test for qualification to the next round will come from Real Sociedad, as such, makes Thursday’s encounter at home a must-win one for them.

Fellow English Premier League club, Arsenal will also begin yet another quest for European glory when they face FC Zurich in the opening round of the group stage.

Though coming off a defeat against Manchester United at the weekend, Arsenal playing FC Zurich in Switzerland might appear like a banana peel for the Gunners, but if there is any side who have the quality to be victorious between the two, it is the boys from North London.

This is not made any better when it is considered that FC Zurich have started their domestic league campaign poorly winning three of their last six games, with the last two being losses.