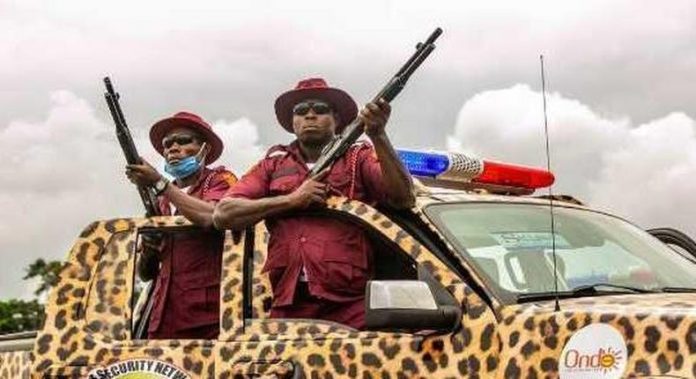 The Western Nigeria Security Network (WNSN) codenamed “Amotekun” says it has arrested no fewer than 243 suspects over various offences in its two years of operations in Ekiti.

Retired Brig.-Gen. Joe Komolafe, the Commandant of WNSC in Ekiti disclosed this in Ado-Ekiti on Friday while briefing newsmen on the activities of the security network since it’s establishment in the state.

He said the concerted efforts of his men and government support had helped reduced criminal activities in the state.

Komolafe, who attributed the success story to the efforts put in place by Gov. Kayode Fayemi of Ekiti as well as other sister security networks in the state, said, “the crime rate has reduced to the barest minimum.”

The commandant, who admitted that no society globally was completely free of crimes and criminals, urged Ekiti residents not to shield criminal elements in their area.

Komolafe listed some of the challenges facing the security network to include absence of sophisticated weapons to combat the criminals, lack of adequate, correct and timely information and the failure of the people to make themselves available as witnesses in the trial of suspects.

He charged well-meaning Ekiti sons and daughters, home and in the Diaspora to invest more in the security network of the state, saying that “security is everybody’s business,”.

While appreciating some individuals and communities, that have reached out to the organisation, he also appealed for more financial assistance to ease the burden of security on government.

The News Agency of Nigeria (NAN) reports that Western Nigeria Security Network, Ekiti Command was inaugurated on Oct. 19, 2020 as a domesticated agency to fight insecurity.