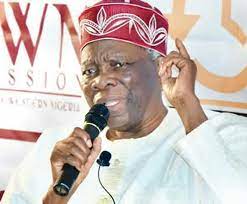 A Yoruba Leader and Head of Yoruba Nation Self-Determination Struggle, Prof Adebanji Akintoye has declared that the Yoruba Nation will be achieved before the 2023 general elections.

He also disclosed that the Yoruba Nation activist, Chief Sunday Adeyemo popularly known as Sunday Igboho will soon return to his base in Nigeria.

He made the declaration on Friday while speaking with Nigerian Journalists at the Yoruba Central office, Cotonou in the Republic of Benin.

The Professor of History disclosed that with the level of consultation and diplomatic moves by the group, he is optimistic that the Yoruba Nation is certain before the elections.

He said although a Yoruba kinsman, Asiwaju Bola Ahmed Tinubu is contesting the presidential election, that that would not in any way affect the actualisation of Yoruba.

Prof Akintoye maintained that the Charter guiding the principle of Yoruba Nation has already made a provision that as long as Yoruba is still part Nigeria, any of Yoruba origin has the right to contest for any position being President, Senator or any other political office.

According to him, “I am confident that Yoruba Nation will be achieved before the 2023 general elections. Nothing will stop us from pursuing it to a logical conclusion.

“Our guiding principle through our constitution has already stated it that as long as we are still part of Nigeria, any Yoruba kinsman, who wish to contest any political office have the right to do so.

“But we are confident that with level of our diplomatic moves and consultation across the globe, Yoruba Nation will be achievable before the 2023 general elections”.