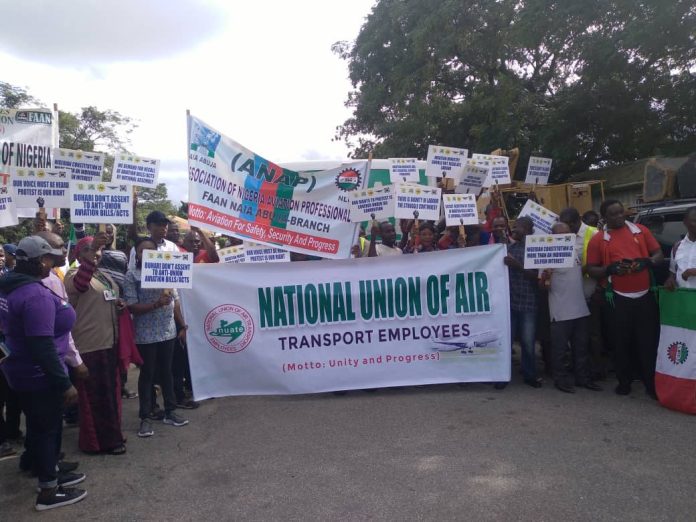 The unions say clauses inserted in the bills give the Minister of Aviation overriding powers to direct affairs on issues affecting trade unions in the industry.

Stressing that the clauses were an attempt to gag and control the unions, they asked the Federal Government to remove them.

One of the clauses reads, “All services which facilitate and maintain the smooth, orderly and safe take-off, flight and landing of aircraft, embarkation and disembarkation and evacuation of passengers and cargo respectively in all aerodromes in Nigeria are hereby designated as essential services pursuant to the provisions of Section 11(1) of the Constitution of the Federal Republic of Nigeria, 1999 (as altered).

“The Minister may by regulations, prohibit all or such class or classes of workers, officers and other employees or persons whether corporate or natural, engaged in the provision of services specified in subsection (1) of this section from taking part in a strike or other industrial action.”

But the unions argue that the clauses contradicted international labour laws and amount to a usurpation of the duties of the Ministry of Labour.

To express their grievances and push forward their demands for the “expunging of obnoxious essential services clause form the Bills/Acts of the aviation agencies”, the workers held peaceful protests in some airports in the country.

Some of them carried placards calling on the President not to assent to the bills. Other placards had messages such as “Our voices must be heard” and “Prohibition of Aviation Union activities is evil” among other messages.

During the protest in Lagos, the General Secretary of the National Union of Air Transport Employees, Ocheme Aba, said classifying aviation workers as essential services personnel is at variance with International Labour Organisation (ILO)’s categorisation.

He said the withdrawal of services by personnel that threatens lives could be described as essential, for which the transport sector does not qualify.

According to him, only workers in the air traffic control services qualify as essential because of their advisory function to aircraft in flight.

He said aviation unions have carried the Nigerian Labour Congress and Trade Union Congress along in the bid to reverse the ugly trend; which seeks to muzzle aviation workers.