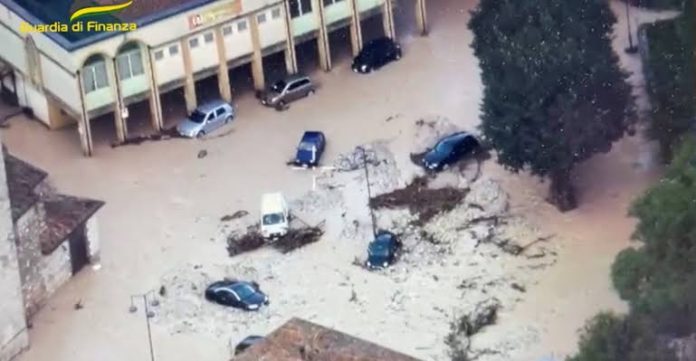 At least eight people have been killed by torrential overnight rains and floods in the central Italian region of Marche, authorities said on Friday (Sep 16), as rescuers continued to search for four people missing.

Around 400 millimetres of rain fell within two to three hours, inundating the streets of several towns around the region’s capital Ancona on the Adriatic coast.

Videos seen by AF24NEWS online show the flash floods in form is a quaking body of water, sweeping away huge structures.

Vehicles were also seen by AF24NEWS, submerged in the flood.

At least seven dead in eastern Italy (Marche) due to flash floods that made “six months of rainfall in an afternoon”, according to Italian media. “This is climate change before our eyes,” writes Repubblica./1 (pic from the town of Cantiano) #alluvione #marche #climatecrisis pic.twitter.com/BqQ3IdOE9z

“It was like an earthquake,” Ludovico Caverni, the mayor of the town of Serra Sant’Abbondio, told RAI state radio.

Footage released by fire brigades showed rescuers on rafts trying to evacuate people in the seaside town of Senigallia, while others attempted to clear an underpass of debris.

Stefano Aguzzi, head of civil protection at Marche’s regional government, said the downpour was far stronger than had been forecast.

“We were given a normal alert for rain, but nobody had expected anything like this,” he told reporters.

Flash floods in Italy’s eastern #Marche region last night leave 7 people dead in the province of Ancona, with several still missing on Friday. This video, by TgLa7, shows the village of Cantiano after more than 400 mm of rain fell in a few hours.pic.twitter.com/9g1gEyCZnV

The head of the national civil protection agency Fabrizio Curcio was heading to Ancona to assess the damage, while party chiefs campaigning for Italy’s Sep 25 election expressed their solidarity.

Enrico Letta, leader of the centre-left Democratic Party said it would suspend campaigning in Marche “in a sign of mourning” and in order to allow its local activists to fully participate in efforts to help the flood-hit communities.