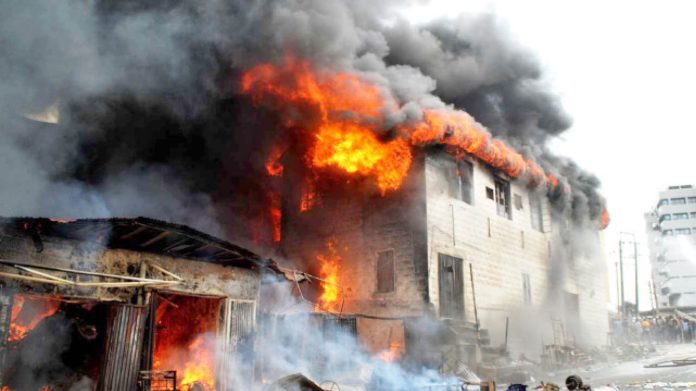 Fire disaster, on Sunday, engulfed a building of about 7flats in Ilorin, Kwara State capital, destroying property worth millions of naira.

The incident, which occurred at about 0258 hours, was linked to power surge.

According to the spokesman of the State fire service, Hassan Adekunle in Ilorin on Sunday, the incident took place at No.63 Lawyer Laro Street Olorunshogo area, Ilorin, in Ilorin West Local Government area of Kwara State.

He disclosed that “on getting to the scene, we realized that the whole building had been engulfed by the blazing fire due to the late call by the sympathizer.”

Hassan said “though the conflagration was huge, however, our firemen were able to demonstrate high level of professionalism and in no time the ravaging inferno was totally extinguished.

“We also damped the surrounding area in order to stop further escalation of the fire.”

The spokesman said leading officer of the firemen crew who attended to the incident, revealed that even though the fire was caused by power surge, a pressing iron was also met plugged in.

The Director of Kwara State Fire Service, Prince Falade John Olumuyiwa, urged citizens to always cultivate the habit of switching off their electrical appliances even before bedtime.

He explained that this would help them to prevent the chances of fire outbreaks in their various homes, and help them to drastically reduce such incidents.