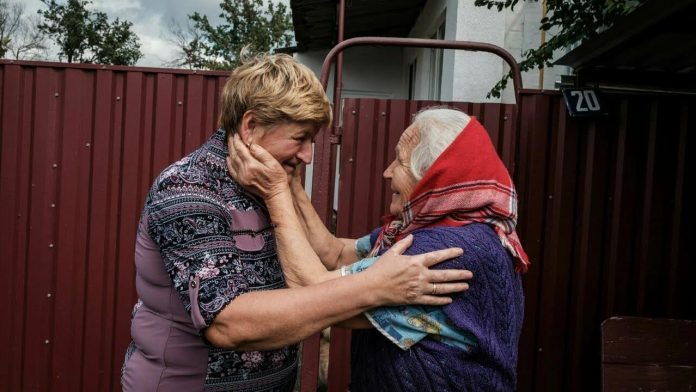 Olga Valkova had often cried since invading Russian forces seized the Ukrainian village of Troitske, cutting her off from her family and her country cottage.

On her return, the 64-year-old wept again, but now she was choking back sobs of joy as she passed out food to the Ukrainian soldiers who liberated her district.

And she could not hold back tears once again as she fell at last into the arms of her brother Leonid Kandaurov, 60, and his wife, her sister-in-law Lydia.

The reunion came six months and eleven days after their lives were turned upside down.

Troitske is a couple of rows of bungalows with vegetable patches, ducks and a fishing lake, nestled among northeastern Ukraine’s vast sunflower fields.

Before the war, Olga and her retired truck driver husband Alex Vashchenko, 65, would visit their white-walled dacha several times a month to tend their vegetables.

Its three rooms are built around a brick oven, above a root cellar to store crops, such as the measly onions that failed this year, untended during the occupation.

‘Weapons pointed’
On February 25, the second day of the invasion, the sudden Russian push on Kharkiv swiftly enveloped Troitske.

Olga was not there, but her friend Anna Kryvonosova, 65, took up the story.

“For three days in a row, starting February 25, Russian armoured vehicles drove by along this street,” she told AFP.

“It was terrifying. Soldiers were on top of the armoured vehicles with weapons pointed at us, at our home. This was a real occupation.

The day of their liberation was scarcely less intimidating.

Sounds of explosions erupted from nearby town of Shevchenkove, and mysterious tanks appeared, swivelling their gun turrets to point at Troitske.

But the villagers were relieved when the infantry unit that marched in under cover from the tanks was the 92nd Brigade of the Ukrainian army.

Anna’s husband Nikolai Kryvonosov is now free to greet visiting reporters with a toast from his stash of moonshine.

“To victory, so that Putin dies. Fuck him,” the moustachioed 67-year-old declared — in Russian — knocking back a shot of the nutty, volatile spirit.

Russian forces used Troitske as a supply route and patrolled the area, but did not set up base within the small village.

Instead, they fortified a tractor workshop down the road, which is now bombed out and being repaired to become a Ukrainian checkpoint.

Locals proudly recount how they called relatives in Kharkiv who reported the Russian position to the Ukrainian SBU security service.

Some of Kremlin chief Vladimir Putin’s supporters defend his invasion by arguing there was a need to protect eastern Ukraine’s “Russians” from persecution.

The Kharkiv region is largely Russian-speaking, but the city itself resisted the Russian advance and the villagers in Troitske did not welcome Putin’s invasion.

Many of the families who spoke to AFP have sons away serving with the Ukrainian armed forces, and some kept Ukrainian flags at home. They were scared but defiant.

Anya Ratiy is only 17, and tried to continue her studies online. She managed to get out of the village in August, and returned after its liberation.

Today she can play football in the afternoon sun, proudly sporting her blue and yellow jersey — Ukraine’s national colours.

Did she wear it when the Russians were about?

“Yes!” she declared proudly, before adding with a laugh: “But when they came we would run and hide.”

The football-playing kids boast of seeing rockets flying overhead as recently as two days ago, but their days of running and hiding are gone for now.

On September 7, Ukraine’s surprise counteroffensive drove the Russian troops back east, and allowed Olga and Alex to return from Kharkiv to her family village.

Singing celebration
Their bungalow was intact. Olga threw herself face down onto her pillow, wailing: “This is my home. This is my bed.”

Olga’s brother Leonid and sister-in-law Lydia remained through the occupation, tending their vegetable plot and orchard. A feast was soon prepared to celebrate.

Leonid is a retired forest ranger and a keen hunter, but the Russian troops seized his hunting rifles.

His excitable hunting dogs are keen to get back into the forest, but for now the table is groaning with cheeses, sausages and vegetables.

Toast after toast is called with various varieties of home-distilled samogon alcohol.

Then Olga and Lydia break into song, first the national anthem “Ukraine is not dead yet” then a rousing patriotic folk song.

Tears flow again as the women hug and share video messages from sons long-absent on the front line, fighting Russian forces on other fronts.