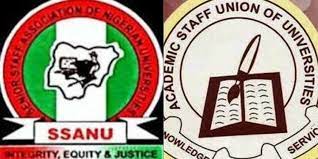 Senior Staff Association of Nigeria Universities has said its members have not been paid a dime since it called off its strike on August 20, 2022.

Earlier, AF24NEWS had reported that the JAC of NASU and SSANU embarked on a National Industrial Action on 27th March 2022 and called it off on August 20, 2022.

Speaking in an interview, the national vice-president, SSANU, Mr Abdussobor Salaam, emphasised that it had been a month since it called off its strike, saying the government had yet to fulfill the agreement it made with the union.

He added that SSANU resumed with a two-month window for the government to actualise the terms of the agreement reached.

Salaam said, ‘‘As we speak, this week shall conclude one month after we signed the agreement and nothing has changed. None of those issues we agreed upon has been addressed.

‘‘More painful is the fact that one month into resumption, our members are yet to receive a dime as salary, meaning they have been going to work without being paid. You can imagine the untold hardship and difficulties involved. We resumed in August and September is coming to an end, yet nothing has been paid. The gesture of good faith extended to the Government in line with our understanding should have covered the payment for the month of August but to date, this has not been done.’’

Salaam stressed that the agreement to suspend the strike were with respect to reinstatement of its members in the Staff Schools, usurpation of headships of Non-teaching units, the issue of IPPIS, the release of the reports of the Integrity Tests conducted by NITDA and providing a permanent solution to salary problems in the system has not been addressed.

‘‘The agreement we had was that these issues would be addressed within a time frame of two months. As a mature and responsible union of professionals, we have played our part but we are yet to see a commensurate level of reciprocity from the government.

‘‘As leaders of the Unions, we have no regrets about the decision to suspend the strike and give two months for Government to act. We have shown a sense of responsibility, maturity, and professionalism required of us as unions and we shall allow the two months window to lapse after which we cannot be held responsible for any strike action thereafter. There is still a month left and we hope Government will do the needful within the one-month remaining,’’ he added.