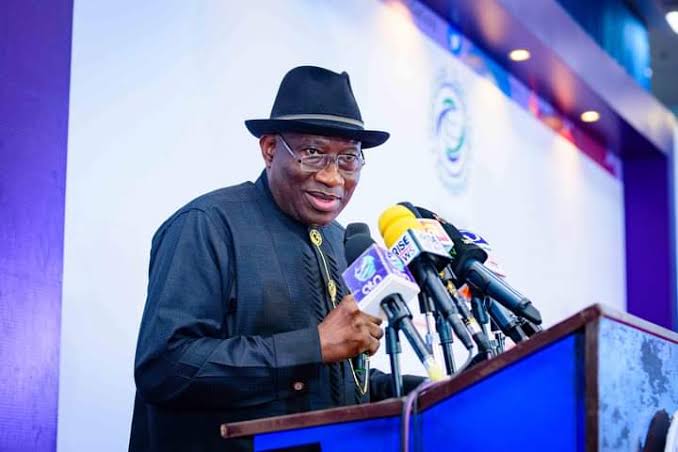 Former President Goodluck Jonathan says the biggest threat to democracy is no longer the gun, but propaganda, fake news, and disinformation.

Mr Jonathan stated this in Abuja at the Goodluck Jonathan Foundation 2022 Peace Conference with the theme, “Nation Building: The Role of Peaceful Elections in a Multi-Ethnic Context’’.

Mr Jonathan urged young Nigerians to embrace good conduct rather than hate speech, saying those advocating for violence and orchestrating fake news were the big threats to democracy.

“We must discourage this issue of hate speech and propaganda that are going on because before this time, we were always afraid of the gun as a threat to democracy.

“So, our young people should know that we must embrace good conduct that would lead to good elections,’’ Jonathan said.

Mr Jonathan also advised political parties, their candidates, and supporters to put the country first in their conduct towards the 2023 general elections.

“So, anybody that is interested in leadership at the level of the president, governor, senator etc you have the biggest stake in protecting the country.

“If you know where nations are in crisis, you will not think about the economy and before you know it everything will go down.

“So, those who want to be president, governors, and their supporters should first know that we need a nation before whoever you are supporting can emerge as a governor or president,’’ Mr Jonathan said.

He added that the interest of every politician should be the people first; saying those who are going into politics to make money should rather go into business.

Mr Jonathan urged religious leaders and civil society to continue to sensitise Nigerians until the country was better.

The former president, who noted that the electoral process of the country had improved, said that with the introduction of technology it would continue to be better and faster.

The Executive Director of the foundation, Ann Iyonu, said that as the 2023 election approached, there was a compelling need now more than ever for multi-stakeholder consensus building towards ensuring credible, transparent, and peaceful elections in Nigeria.

Ms Iyonu said that to avoid a situation where elections divide rather than strengthen nations, all stakeholders needed to make a conscious effort to embrace and promote a culture of peace, justice, equity, and fairness for all groups in the polity.

She said that the aim of the conference was to provide the avenue to examine how the Nigerian democratic space had evolved, discuss the trends and threats to an inclusive and peaceful election.

“Promote the culture of tolerance among different political actors and highlight best practices for the conduct of credible and violence-free elections in Nigeria.

“We also hope that at the end of the deliberations, we would have canvassed strategies toward nation-building that will consolidate our nation’s 23 years of democracy and sustain a culture of peaceful elections in the country,” she said.