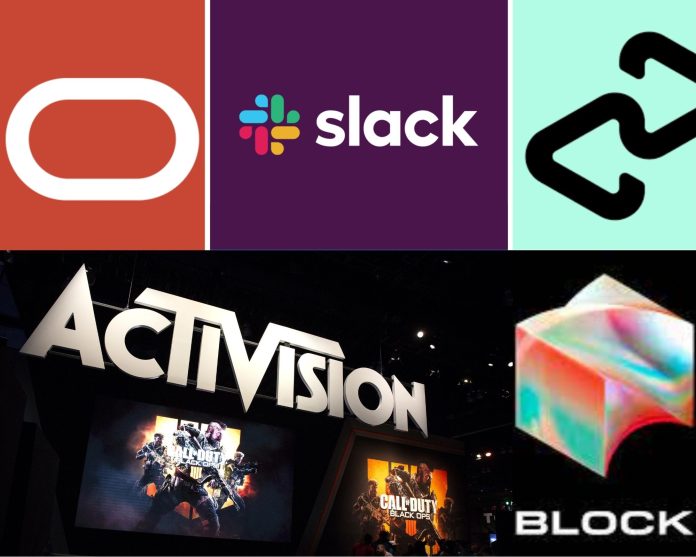 In line with its penchant for heralding historical moments, the 2020s have already seen some of the largest tech acquisitions in history. In September 2022, it was reported that American software giants Adobe will be acquiring online collaborative design software company Figma for $20bn in cash and stocks.

AF24NEWS has compiled a list of 5 other tech takeovers in the 2020s that dwarf Figma’s $20bn price tag.

In January 2022, American multinational technology giant Microsoft announced that it will be acquiring game-making company, Activision Blizzard, for $95.00 per share, in an all-cash transaction valued at $68.7 billion, inclusive of Activision Blizzard’s net cash.

After the purchase of the gaming company known best for its Call of Duty first-person shooter franchise, Microsoft, known for its X-box gaming systems, was set to become the world’s third-largest gaming company by revenue, behind Tencent and Sony.

The acquisition deal also included iconic franchises from subsidiaries of Activision Blizzard, including the gaming studios behind “Warcraft,” “Diablo,” “Overwatch,” “Call of Duty” and “Candy Crush”.

In May 2022, Broadcom, an American design and manufacturing company known for its semiconductor and infrastructure software products, announced that it was purchasing VMware inc, an American cloud computing company.

Broadcom’s cash-and-stock offer valued VMware at about $61bn, based on the closing price of the Company’s common stock on May 25, 2022. Broadcom will also assume $8 billion of VMware net debt.

Block is best known for CashApp, a mobile payment service available in the US and UK. The company announced its acquisition of AfterPay, basing the purchase price on the closing price of Square’s common stock of $247.26 on 30 July. The transaction was finalised in the first quarter of 2022.

According to reports, Afterpay, a company best known for its ‘buy now, pay later’ services, was acquired for expansion purposes.

Dorsey, who co-founded Square (now Block) in 2009, said “Square and Afterpay have a shared purpose. We built our business to make the financial system more fair, accessible, and inclusive, and Afterpay has built a trusted brand aligned with those principles.”

“Together, we can better connect our Cash App and Seller ecosystems to deliver even more compelling products and services for merchants and consumers.”

On 20 December 2021, it was announced that database giants Oracle had closed a deal to acquire health IT company Cerner.

The transaction was Oracle’s largest acquisition ever.

Oracle had labelled Cerner as an “anchor asset” in their bid to expand into the healthcare sector. Oracle plans to scale up its cloud solutions for hospitals and health systems, capitalising on the opportunities in the global healthcare sector, which is valued to be about $12tn.

In June 2022, it was reported that the database solutions company cleared the final regulatory hurdle for the $28.3bn acquisition.

By the end of 2020, executives from Salesforce, a leading company in Customer Relationship Management (CRM) solutions, and Slack, an office messaging platform began discussions concerning an acquisition deal.

Surprisingly, Slack, which had just been valued at $7bn after going public in 2019, was speaking to Salesforce about acquiring one of the CRM giant’s services, Quip, a collaborative productivity software Salesforce had taken over in 2016.

However, continued discussions and a turn of events during the pandemic caused Slack CEO Stewart Butterfield to sell the platform instead.

In July 2021, Salesforce announced that it would buy Slack for $27.7 billion in cash and stock. The move was part of a wave of acquisition deals made by tech companies to capitalise on remote work, which was being popularised by the coronavirus pandemic.