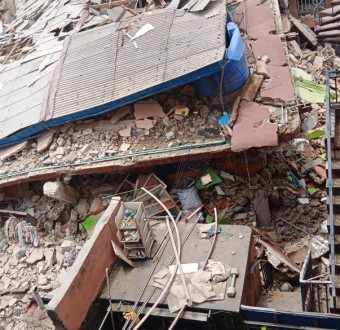 Tragedy struck in Okitipupa, headquarters of Okitipupa Local Government Area of Ondo State on Wednesday when a dilapidated classroom building of L. A. Primary School in the town collapsed on a middle-aged carpenter, Ademola Lawrence, killing him instantly.

It was gathered that the 52-year-old carpenter was trying to pull down the dilapidated building in order to give way to another structure when the building collapsed on him.

The father of four was said to have died instantly before his remains were removed from the rubbles.

READ ALSO: Musician Chop Boii and three others are brutally murdered and their bodies mutilated in a house in Abuja

According to a source, the deceased who hailed from Ode-Irele in the Irele Local Government Area of the state was performing the work of a bricklayer when the incident happened.

The source added that a former Head Teacher of the school had halted the contract but the deceased resumed work after a new Headmaster resumed in the school with the contract renewed.

Meanwhile, the corpse of the deceased had been deposited at the morgue of the State Specialist Hospital in Okitipupa.