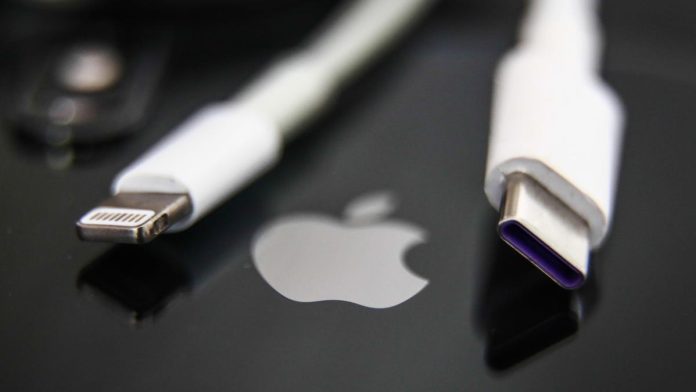 Apple will be forced to change its iPhone charger in Europe after EU approves new law stating that all mobile phones, tablets and cameras must use USB-C by 2024.

In a blow for Apple, the EU has approved a law that will make USB-C charging ports mandatory on all phones, tablets and other electronic devices.

Approved by the European Parliament in Strasbourg, France, on Tuesday, the law will force Apple to stop selling iPhones with that use its proprietary power connector, known as ‘Lightning’, in EU countries.

It will instead make USB-C connectors – currently used by Android-based devices – the EU standard, forcing Apple to change the charging port on its new products.

The law, which comes into effect in 2024, affects EU countries only, meaning the UK is not thought to be affected.

But in European markets such as Ireland, France and Germany, Apple will have to transition to USB-C, likely starting with the iPhone 15, set to be released next year.

What is USB-C?
USB-C is an industry-standard connector for transmitting both data and power on a single cable.

It was developed by the USB Implementers Forum (USB-IF), the group of companies that has developed, certified and shepherded the USB standard over the years.

However, it is more oval in shape and slightly thicker.

READ ALSO:Apple to make iPhone 14 in India in shift away from China

One of the best features of the USB-C is its ‘flippability’, which means it doesn’t have a ‘correct’ orientation, and can be used either way.

The new law, which was adopted on Tuesday with 602 votes in favour and 13 against, confirms an earlier agreement in June this year.

‘We have waited more than 10 years for these rules, but we can finally leave the current plethora of chargers in the past.

‘This future-proof law allows for the development of innovative charging solutions in the future, and it will benefit everyone, from frustrated consumers to our vulnerable environment.

‘These are difficult times for politics, but we have shown that the EU has not run out of ideas or solutions to improve the lives of millions in Europe and inspire other parts of the world to follow suit.’

Ben Wood, chief analyst at CCS Insight, hailed the law as ‘a victory for common sense’.

‘It is now inevitable that Apple will have to capitulate and transition to USB-C on the iPhone 15 when it arrives in 2023,’ he said.

Laptops also are covered, but manufacturers will have extra time to comply (until 2026).

Apple fans in affected countries will of course be able to still use their old Lightning chargers and devices that have Lightning ports.

But new devices sold in the affected countries from 2024 will have to be USB-C.

Ultimately, it should make life easier for consumers fed up with rummaging through a tangle of cables for the right one.

When the agreement was reached in June, it had been uncertain if the decision could affect Apple products sold in the UK and other non-EU countries in Europe.

But a UK government spokesperson previously told MailOnline: ‘We are not currently considering replicating this requirement.’

The Northern Ireland Protocol was struck in order to prevent a post-Brexit hard border on the island of Ireland, separating the north from the republic.

But it means Northern Ireland continues will follow some European Single Market rules. The Republic of Ireland is an EU country, so it will also have to comply.

To simplify things, Apple could just opt to make devices with USB-C ports in the whole of Europe.

Wood said UK consumers will get devices with USB-C ‘by default’, because it ‘will make no sense for consumer electronics manufacturers to offer devices with anything else’.

The EU introduced the rule because it wants a uniform charging cord for smartphones and other devices to reduce electronic waste.

The union estimates that discarded or unused chargers account for 11,000 metric tons of e-waste in Europe every year.