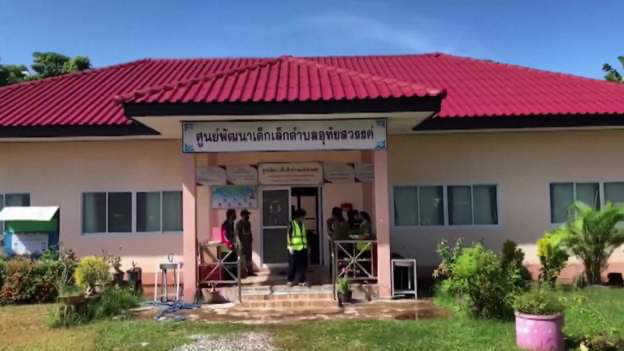 No less than 34 people have been killed in an attack at a childcare facility in north-eastern Thailand on Thursday, according to multiple local news outlets.

More than 20 children are among the dead.

At least 12 more people have been wounded.

The attack began when a man armed with a gun and a knife stormed into the childcare facility in Nong Bua Lamphu province.

The gunman, who killed himself after the shooting, has been identified as former police officer Panya Khamrab.

He was dismissed from the police force over drugs offences last year, police say
Prime Minister Prayuth Chan-Ocha has ordered an urgent probe into the attack and offered condolences to the families of the victims.

Mass shootings are relatively rare in Thailand, a region where gun ownership is relatively high.

Illegal weapons are also common, according to the Reuters news agency.

In 2020 a soldier killed 29 people and injured dozens more in the city of Nakhon Ratchasima.

Thai police are asking people not to share pictures and videos of the shooting and the victims on social media.

Extremely graphic footage and still images purported to be from the scene are circulating on social media.

Police are giving more details about what happened.

The gunman became agitated after arriving at the nursery to find his child was not there, officers say.

He subsequently opened fire on and crashed his vehicle into a crowd of bystanders, before returning home and killing his wife and child, police spokesman Paisan Luesomboon said.

Eyewitness Paweena Purichan, 31, told the AFP news agency that she had encountered the gunman driving erratically after the attack.

“He intended to crash into others on the road,” she said. “The attacker rammed a motorbike and two people were injured. I sped off to get away from him.”

She added that the gunman was well known in the local area as a drug addict.

Global leaders have been offering their sympathies to the families of the victims of this morning’s attack.

UK Prime Minister Liz Truss tweeted that she was “shocked to hear of the horrific events in Thailand this morning”.

“My thoughts are with all those affected and the first responders. The UK stands with the Thai people at this terrible time,” she added.

Australian leader Anthony Albanese wrote that it was “impossible to comprehend the heartbreak” and said, “all Australians send their love and condolences”.