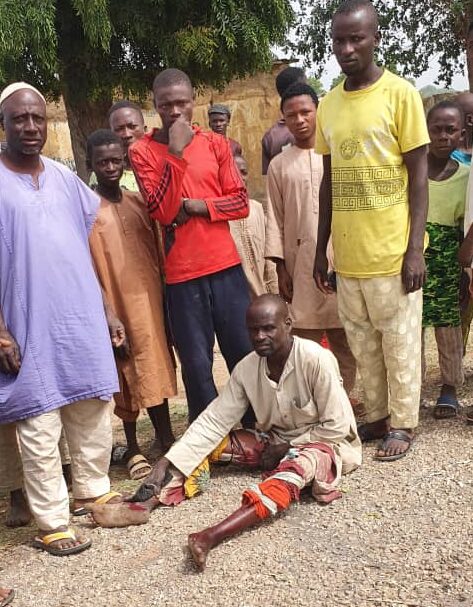 Terrorists operating in Zamfara State attacked a police station in Magami community of Gusau on Tuesday and stole the phones of police officers on duty.

It was gathered that the terrorists arrived in the community around 3:40 p.m. and went straight to the police outpost.

Magami is one of the conflict-ravaged communities in Zamfara State. Incessant attacks by terrorists have forced several residents to flee to Gusau, the state capital, for safety.

A local journalist who reports the terror attacks in the state, Abdul Balarabe, said the attack was possibly the terrorists’ way of sending a clear message to security agencies in the state.

“From what I’ve learnt so far, the terrorists didn’t hurt any of the policemen they found at the counter but only collected their phones and other valuables and made some threats,” Mr Gusau said.

He said after collecting the phones, the terrorists shot sporadically into the air, causing commotion before they went back into the bush.

Highway blockades
Also on Tuesday, some terrorists attacked the Funtua-Gusau highway in the state.

There has been an upsurge of terrorist attacks along the Funtua-Gusau highway, the major highway linking Zamfara with neighbouring Katsina State. Residents said the road has become dangerous for motorists and commuters due to the activities of the terrorists.

Road users said the danger zones on the highway include Sheme, Yankara on the Katsina State side of the road and Kucheri, Magazu, Wanzamai on the Zamfara side.

In Tuesday’s attack on motorists, Mr Balarabe said a commuter was shot twice in the leg when the driver of the vehicle he was travelling in refused to stop after being ordered to by gunmen.

He said when soldiers arrived at the scene and cleared the road, the terrorists escaped through a bush path and blocked Wanzamai to Yankara for over 30 minutes.

A security source who asked not to be named because he was not authorised to speak to the press, said the terrorists are taking advantage of crops planted on the sideways of highways to hide when being pursued by security personnel.

“The problem we’re facing is that maize, millet and guinea corn planted by people have been providing the terrorists with a temporary hideout. They hide in the crops to launch attacks and quickly retreat back,” the source said.

The police spokesperson in Zamfara State, Mohammed Shehu, did not respond to calls and SMS sent to him on the two attacks but in an earlier statement he sent to PREMIUM TIMES, he confirmed the terrorists are blocking highways.

He said the police commissioner in the state, Kolo Yusuf, visited the most vulnerable highways including the Funtua-Tsafe highway and promised to tackle the activities of terrorists attacking motorists.

“The Commissioner of Police Zamfara State Command, CP Kolo Yusuf psc, today patrolled the entire Gusau – Yandoto – Tsafe – Funtua Road for hands-on assessment of the security challenges, and personally supervised some strategic points where the operational deployment of additional Police tactical squad was made to ensure the safety of travellers along the route.

“In the course of the patrol, the commissioner of Police also mapped out some salient and strategic locations along the road which were instantly fortified with the deployment of Police tactical operatives drawn from the Police Mobile Force (PMF), Counter Terrorism Unit (CTU), and Anti – Violence Squad of the Command,” he said.