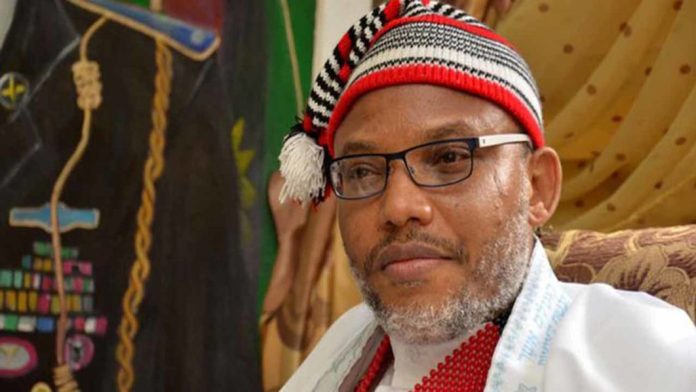 Nnamdi Kanu, leader of the Indigenous Peoples of Biafra, has filed a new N100 billion lawsuit against the Federal Government for his continued detention despite a Court of Appeal judgement ordering his release.

Kanu, in the fundamental right enforcement suit he filed through his team of lawyers led by Chief Mike Ozekhome, SAN, and Ifeanyi Ejiofor, is praying the Federal High Court in Abuja to declare his continued detention in custody of the Department of State Service, DSS, as “illegal, unlawful, oppressive, unconscionable, and unconstitutional”.

He maintained that his detention in disobedience to the appellate court’s judgement, violates his fundamental rights to dignity of human persons, personal liberty, and right to freedom of movement as guaranteed by sections 34, 35, 36, 39, and 41 of the 1999 Constitution, as amended.

Cited as 1st to 4th Respondents in the suit marked FHC/ABJ/CS/1945/2022, are the Federal Republic of Nigeria, the Attorney-General or the Federation, the State Security Service and its Director General.

Specifically, the IPOB leader, is among other things, seeking an order of the high court, directing the Respondents to unconditionally release him from their custody forthwith.

As well as, “An order of injunction restraining the Respondents, their agents, privies, assigns or howsoever called, from further interfering with the Applicant’s rights, and/or dealing with the Applicant in a manner inimical to his Fundamental Rights guaranteed by the 1999 Constitution of the Federal Republic of Nigeria (As Amended) 2011.

“Compensatory and exemplary damages of N100,000,000,000.00 (One Hundred Billion Naira Only), against the Respondents for the gross violation of the Applicant’s fundamental rights to dignity of the human person, personal liberty, and freedom of movement.

Likewise, “An order of this honourable court directing the Respondents to tender an unreserved public apology to the Applicant in two National Dailies”.