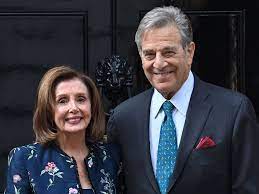 Paul Pelosi, husband to United States Speaker Nancy Pelosi, was on Friday brutally attacked in his home in California.

He was attacked by a suspect, who the police have identified as David DePape. He assaulted the farmer using a hammer, which they both struggled over, according to reports.

According to the BBC, a spokesperson for Mrs Pelosi said on Friday afternoon that Mr Pelosi “was attacked at home by an assailant who acted with force, and threatened his life while demanding to see the Speaker”.

He was admitted to Zuckerberg San Francisco General Hospital “where he underwent successful surgery to repair a skull fracture and serious injuries to his right arm and hands”, the spokesman continued, adding that his doctors expect a full recovery.

San Francisco Police Chief, William Scott in a news conference on Friday, said officers responded to a call at around 02:27 local time (09:27 GMT) where they found Mr Pelosi and the suspect struggling over a hammer, but it was wrestled from Mr Pelosi’s control by the suspect, who violently assaulted him with it.

The suspect was then tackled and disarmed by officers. He had attempted to tie up Mr Pelosi “until Nancy got home”, law enforcement sources told CBS News.

Mr DaPape is facing charges of assault with a deadly weapon, burglary and several other felonies, Mr Scott said.

The motive for the attack was still unclear. However, witnesses noted that he was asking the whereabouts of the speaker when he broke in.

Mrs Pelosi is one of the most powerful politicians in the country. She was re-elected to a fourth term as Speaker of the House of Representatives in 2021, making her second in line to the presidency after Vice-President Kamala Harris.

Since the January 2022 Capitol Riot, members of Congress have been on high-alert over security threats.

Mrs Pelosi’s office was ransacked by supporters of former President Donald Trump during the attack.

Last year, her San Francisco home was reportedly vandalised with graffiti saying “cancel rent” and “we want everything”. Protesters left the head of a pig on her driveway.

President Joe Biden has since condemned the attack on Mr Pelosi, describing it as despicable.

“Enough is enough. Every person of good conscience needs to clearly and unambiguously stand up against the violence in our politics, regardless of what your politics are,” Reuters quoted Mr Biden as saying in Philadelphia.

Vice President Kamala Harris in a tweet said, “Doug and I are appalled by the attack on Paul Pelosi, Speaker Pelosi’s husband. The entire Pelosi family is in our hearts and we wish him a speedy recovery.”

“This is an outrage and our hearts are with the entire Pelosi family. ⁦We pray Paul will make a full recovery. There can be no tolerance for violence against public officials or their families. This man should be prosecuted to the fullest extent of the law,” former Vice President Mike Pence wrote in a tweet.