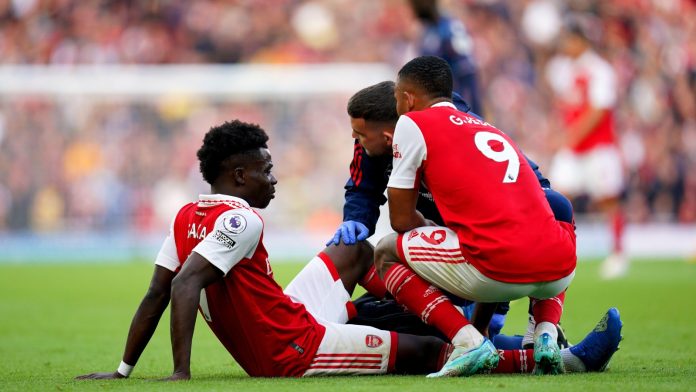 Arsenal winger, Bukayo Saka, could be fit to play against Chelsea on Sunday.

The UK Sun reports that the Gunners are optimistic the 21-year-old has not suffered a serious injury.

Saka provided an assist just four minutes into the game for Gabriel Martinelli to score, but was forced off inside half an hour during Sunday’s 5-0 thrashing of Nottingham Forest.

After initially receiving treatment on the pitch following a heavy challenge from Renan Lodi, he was brought off 10 minutes later.

Saka headed straight down the tunnel, with his replacement Reiss Nelson going on to score twice in the second-half.

There was encouragement as the England star left the Emirates without needing crutches or a protective boot.

He is expected to be rested for Arsenal’s Europa League fixture against FC Zurich on Thursday, but could be involved at Stamford Bridge at the weekend.