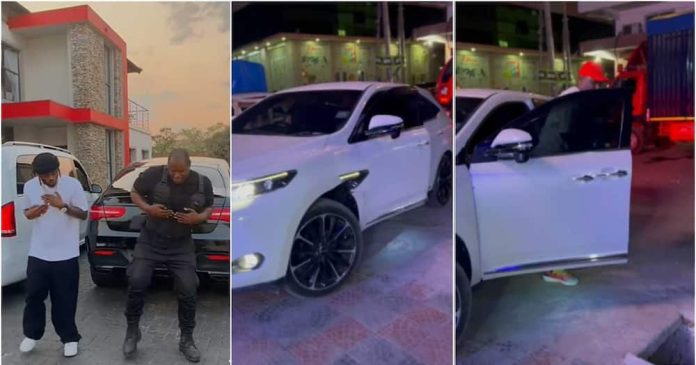 Amos Onesmus Rupia, the bodyguard of Diamond Platnumz, showcased a Lexus RX model he owns The heavily built bodyguard took out the ride costing around N14.7m for a trip to the barbershop It is a stark contrast from the singer’s ex-bodyguard Mwarabu Fighter’s life as he complained of being paid peanuts .

Diamond Platnumz’s bodyguard Amos Onesmus Rupia has offered a glimpse into the luxurious life he lives.

Diamond’s bodyguard showcases Lexus On Friday, November 3, the heavily built bodyguard posted a video showing him driving a luxurious ride for a shave .

The footage shows that the vehicle appeared to be an RX 530, costing around N14.7m. The vehicle’s features include wireless device charging, a moon roof and blind-spot monitoring. Rupia’s ride boasts front and rear parking sensors, traffic-jam assist and a tow package. The Lexus brand is owned by the Toyota Motor Corporation and is the multinational company’s luxury division.

Lexus vehicles are pricier than Toyotas, and most cars are larger. Lexus is rated as reliable as Toyota, if not more, in some cases. Rupia impressed many netizens, with some of them urging him to get into music. famoustim64: “We are waiting for your song brother.” Elpadrinotz: “Superstar bouncer.” kingdebarber_tz: “Looking good man.” garse_the_boss454: “Diamond’s bodyguard is even a star.”

Diamondplatnumz: “You could have stayed still while they were shaving you lest they cut you.”

Diamond Platnumz’s father says it’s unmanly to get nose piercing Abdul Juma, who Diamond Platnumz’s mother disowned, has spoken out after the musician got a nose piercing. Diamond posted a video showing him getting the piercing and stud as his bodyguard looked on. Juma was unimpressed by the artiste’s actions and criticised him, saying that it was a preserve of women. “He made a huge mistake. In our customs, men are not supposed to have nose piercings,” he told Mbengo TV.

The ailing older man further said that his stardom, wealth or pride might have informed the music mogul’s actions.