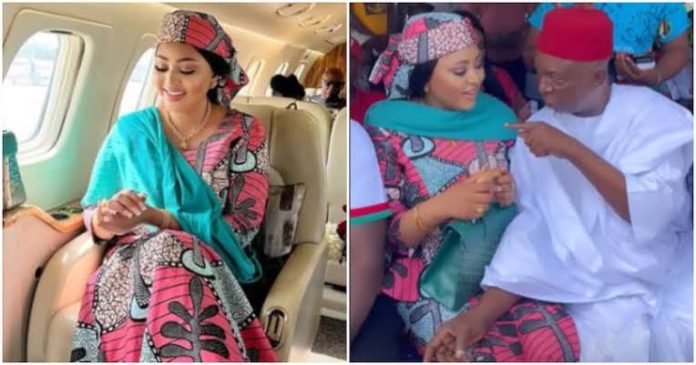 As a supportive wife, Regina Daniels joined her billionaire hubby Ned Nwoko on one of his campaign trips The actress took to her Instagram page with a video of their time campaigning in the Northern part of Delta state The mum of two dressed like a Muslim woman, complete with a head scarf and veil.

Actress Regina Daniels billionaire husband Ned Nwoko is running for the senatorial seat in Delta state, and he kicked off his campaign. As a dutiful wife, the actress went all out to support her husband and his dream and even looked the part.

The mum of two rocked a native attire and paired it up with a headscarf and veil, just like northern Muslim women whom many call ‘hajia’.

The actress also got her husband on camera, as the campaign activities around them unfolded.

Day 1 of our campaign for the senatorial seat delta north.”

Regina Daniels reveals she doesn’t enter the kitchen Popular Nollywood actress, Regina Daniels, has continued to embrace her billionaire wife status going by her social media posts.
The movie star shared a video on her Instagram story of herself with her husband on their way out. In the clip, Regina was seen chatting and laughing with her husband when he mentioned that she is the one who cooks for him. In response to that, the movie star laughed and noted that people do not even know that she does not enter the kitchen and Ned Nwoko laughed at the statement.