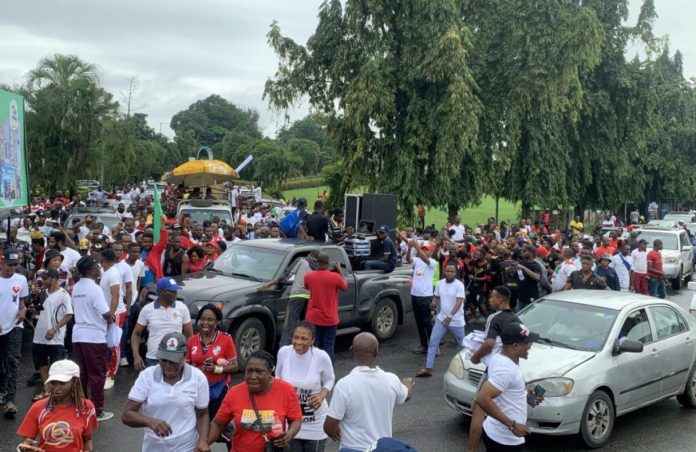 Supporters of the Presidential candidate of Labour Party, LP, Mr. Peter Obi and his running mate, Dr. Ahmed Yusuf Datti, Monday, stated that they will embark on a car-rally with 100 cars across different parts of Ebonyi State.

Briefing journalists in Abakaliki, the Southeast Regional Coordinator of the Obi Datti Car-rally support group and its Ebonyi State Coordinator, Comrade Ozurumba Chimezie Jeff added that “The rally would be a 100km car drive slated for 19th & 26th November; and 3rd of December 2022, across the 36 states and FCT to get everyone involved in the mission to rescue Nigeria from bad governance.”

According to him, “the Obi-Datti car-rally will be on an automobile convoy, and will not be on foot. This would create a hitch-free campaign for us, devoid of human traffic and congestion.”

Ozurumba explained that: “This has become necessary because the event would be happening simultaneously across the 36 States in the country, the FCT, and southeast Nigeria.

“Obi-Datti Car-rally is dedicated to the Peter Obi and Ahmed Datti campaign organization, which is aimed at sensitizing and creating awareness for people to vote for Mr. Obi as the most qualified candidate to become the president of our great nation Nigeria come 2023.

READ ALSO:2023: Obidients to organize car-rally in Ebonyi with 100 cars

“We believe in his proven capacity and credibility as a leader with a sound mind who possesses the required qualification to tackle the current challenges facing our nation. No doubt, these issues have made us to be going backward instead of moving forward as a people.

“Gentlemen of the press, you could relate with us clearly when we say that the security of this nation at the moment is nothing to write home about.

“You all know that our economy is visibly in shambles. The price of things have continued to go up and people are hungry. No better business opportunities and no better employment opportunities. Our production level is nothing to write home about. We keep importing almost everything we consume and we keep depending on other nations to survive. Our education system, health care, and innovation sectors are all deprived of competent and quality leadership, yet, we are the giant of Africa.”