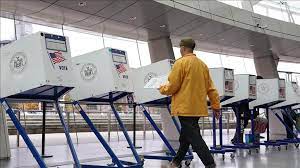 US voters are casting early ballots in the midterm elections that will determine control of the House and Senate, as candidates try to muster last-minute support.

Democrats are trying to cling to their majorities in Congress for the final two years of President Joe Biden’s first term. Republicans are favored to win control of the House, while the race for Senate control appears tight.

The president had a busy weekend campaigning for Democrats in tight races in New York and Pennsylvania, where former President Barack Obama joined to help Senate candidate John Fetterman in his bid to best GOP opponent Dr. Mehmet Oz.

“This crowd is so loud, I think they can hear us in Latrobe,” Biden told a raucous crowd at Temple University in an apparent dig at former President Donald Trump, who was campaigning for Oz outside Pittsburgh.

Voters have already cast more than 42 million ballots in the midterm elections as of Monday evening. Election officials and U.S. prosecutors will be keeping a close watch on the polls for any signs of voter intimidation on Tuesday — including in 24 states where the Justice Department will send poll monitors.

A judge put restraints on extremist groups that had posted armed men in tactical gear during early voting at polls in Maricopa County, which had a pivotal role in the 2020 election.