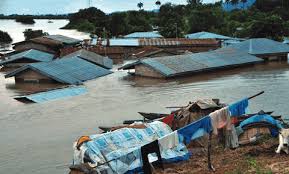 The Federal Government of Nigeria, on Monday raised the alarm that another devastating flooding would occur in the country next year, if proactive actions were not taken by government at all levels.

According to the government, early warnings given to the states in 2022 by NEMA were ignored and led to the devastating effects all over the affected areas.

Speaking on Monday in Abuja when he appeared before the Senator Yusuf Yusuf, APC, Taraba Central led Senate Committee on Special Duties to defend the 2023 budget, the Director General of National Emergency Management Agency, NEMA, Mustapha Mohammed, said: “Let me also use this opportunity to prevail on the committee to intervene on our behalf. We have written to states several times. This flood is still coming in 2023.

“They must be advised early to set up SEMA and local emergency committee and fund them adequately. We gave similar warning last year but our advice was ignored.”

Mohammed, who told the senators that despite early warnings issued to state and local governments whose areas were flood-proned, none of them had taken any positive steps to guard against it.

He, however, explained that the Federal Government had opened up the nation’s silos and released 12,000 tonnes of grains already, which were shared to all the 36 states of the federation

The NEMA Director- General advised state governments to do more and be proactive in disaster management, instead of abandoning it to the federal government.

He said the National Assembly should help to inform the states early enough to avoid another devastating effects.

In her remarks, a member of the committee, Senator Uche Ekwunife, PDP, Anambra Central, expressed doubts over the possibility of the National Assembly telling states and local governments to put in place arrangement that could prevent flooding.

“We can only appeal to them but our constituent has a greater role to play by telling the state governments to act fast on the NEMA warning.”

The committee challenged the people of the affected states to hold their governors accountable because it was beyond the mandate and jurisdiction of the National Assembly.

Senators, who urged NEMA to make request for additional manpower through the Head of Service to the President, stressed the need to review the extant conditions of service of NEMA, so the staff could enjoy a special salary scale.

Also speaking, Senator Francis Fadahunsi, PDP, Osun State, appealed to states to use the huge financial resources available to them, especially the ecological funds, to address the environmental challenges confronting them.