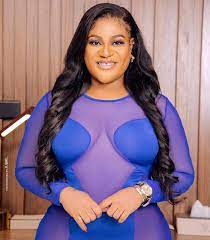 Nollywood actress Nkechi Blessing has sparked a major controversy online with a post she shared as she describes herself as an incoming Olori The actress, who had in the past shown interest in becoming one of the new wives of the Ooni of Ife, seems to have been granted her wish Nkechi, noted in a post shared on her page, calling herself an incoming bride and a royal highness the Queen of Ile-ife

The actress had publicly made a pass of interest to the Ooni of Ife some weeks back after the royal father had engaged in a series of weddings of 6 new brides.

At the time of publishing, it wasn’t ascertained if truly Nkechi Blessing is set to become the new bride to the throne of Ile-Ife; however, her proclamation has sparked a massive outburst online

Make king no die before his time”: Funny reactions as Nkechi Blessing shoots her shot at Ooni of Ife Meanwhile, Legit.ng recalls reporting that the controversial Nigerian actress Nkechi Blessing recently caused a huge buzz online after she showed interest in becoming one of the Ooni of Ife’s new wives.

Taking to her official Instagram page, the movie star shared a photo of her and the Yoruba monarch at an event. The actress then accompanied the photo with a caption where she shot her shot at the Ooni and told him she was patiently waiting for her turn.