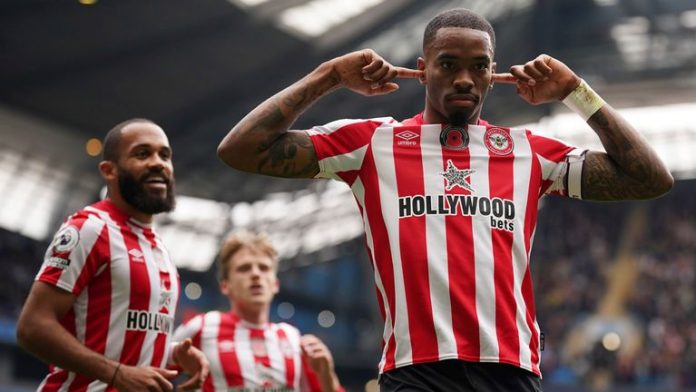 Ivan Toney scored a late-minute winner as Brentford snatched a 2-1 win away vs reigning champions Manchester City on Saturday in the final game of the Premier League before the World Cup break.

Although Manchester City’s talisman Erling Haaland returned to the starting lineup for the English champions, it was Ederson who ensured parity was sustained in the early parts of the half. The City goalkeeper came up big early for an uncharacteristically jittery City as Ederson after he was called into action twice in the opening six minutes to make big saves to keep things level.

Brentford finally broke the deadlock in the 16th minute when their own returning star striker Ivan Toney looped a header into the corner after John Stones kept him onside.

City were then denied a big penalty shout when, following a VAR check, it was determined that Rico Henry had handled the ball on the edge of his own area.

However, the Manchester club equalized in first-half stoppage time when Phil Foden lashed a glorious half-volley into the roof of the net from a loose ball at a corner.

There was a lengthy delay in the second half for an Aymeric Laporte head knock but he showed no signs of feeling any ill effects from that when he pulled off an incredible last-ditch intervention to divert the ball away from Toney as he was set to pounce for his second.

Ederson made another huge stop in the 10 minutes of injury time which looked to have secured a point only for Brentford to win it in the 98th minute with a quick break from a corner which ended with Toney tapping home from close range to perhaps send a message to Gareth Southgate over his World Cup exclusion.

Saturday’s result means league-leaders Arsenal have the chance to move five points clear of Guardiola’s men at the top of the table, should they get a win against Wolves later tonight.