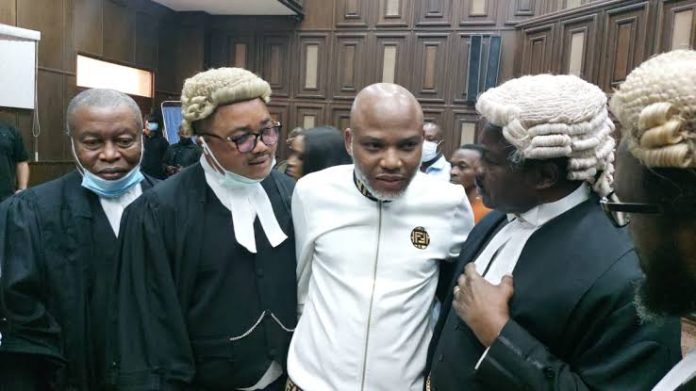 The full hearing in the judicial review challenge brought against the Foreign Secretary on behalf of separatist leader Nnamdi Kanu will take place on Tuesday, November 15, 2022.

According to Politics Nigeria, Nnamdi Kanu, the leader of the Indigenous People of Biafra (IPOB) and a British-Nigerian citizen, has consistently called for the sovereignty of Nigeria’s southeast region.

The challenge, brought by Kanu’s family, relates to former Foreign Secretary, Liz Truss’ unwillingness to reach a decisive view that the 55-year-old was a victim of extraordinary rendition and other human rights abuses by the Nigerian government, an approach still maintained by her successor, James Cleverly.

Despite admissions by the Nigerian government itself, damning findings by the United Nations (UN) Human Rights Council Working Group on Arbitrary Detention and the Nigerian Court of Appeal, it remains the UK government’s position that it simply cannot decide how Kanu was brought to Nigeria (in June 2021), what happened to him en route, and whether he has been detained arbitrarily and, if so, what action the UK should take.

Highlighting the importance of the case in a preliminary ruling, Justice Richie said: “The right to life of a British subject is at the centre of this judicial review in which allegations of unlawful rendition and torture are made against the Nigerian government, which allegations at Court of Appeal level have apparently been upheld by the Nigerian Courts.”

In advance of Tuesday’s hearing, Kingsley ‘Kanunta’ Kanu, who has brought the challenge on behalf of his brother, said: “I am very pleased that my brother’s plight will be heard in the High Court tomorrow and that a British judge will consider whether the Foreign Secretary has acted lawfully to date in refusing to reach a firm view on his extraordinary rendition.

“The Nigerian courts have shown that they uphold the rule of law and are willing to hold the Nigerian government accountable.

“I believe the British government must act equally decisively when the serious violations of the human rights of British citizens abroad are concerned.”

Shirin Marker, solicitor at Bindmans LLP who represents Kanu’s family, said on Monday: “It is impossible to understand the position of successive Foreign Secretaries on this case. They have become mired in a culture of compulsive procrastination in the face of overwhelming evidence of serious human rights abuses, rather than responding in a principled and decisive way and fulfilling the most basic function of a state, which is to protect its own citizens from harm.”

Kanu’s family is represented by John Halford and Shirin Marker of Bindmans LLP, together with Charlotte Kilroy KC of Blackstone Chambers and Tatyana Eatwell of Doughty Street Chambers.