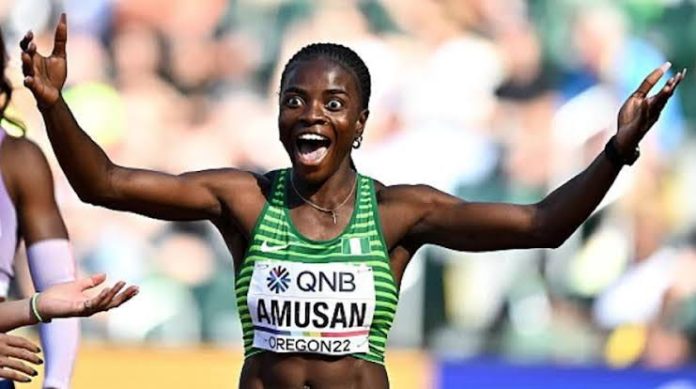 Nigeria’s Tobi Amusan, the world record holder for 100m hurdles, has been named among the five finalists for the 2022 Women’s World Athlete of the Year.

The names of the five finalists were announced in a statement published on Monday by the World Athletics (WA).

Amusan will have to battle it out with Shelly-Ann Fraser-Pryce of Jamaica, Kimberly Garcia of Peru, Sydney McLaughlin of the United States, and Yulimar Rojas of Venezuela for the prestigious award.

Find out who will be crowned winner at the #AthleticsAwards on 5 December 👑 pic.twitter.com/U0mv7L7tYw

According to WA, the finalists were determined through a three-way voting process involving fans on social media, World Athletics Council and the World Athletics Family.

“The five athletes, who represent five countries from three area associations, have achieved sensational performances across a range of athletics disciplines in 2022, at the World Athletics Championships Oregon22, World Athletics Indoor Championships Belgrade 22, one-day meeting circuits and other events around the world,” WA wrote.

READ ALSO: I was told I might never get married’ — Ooni’s new wife Tobi shares testimony

The winner will be announced on December 5 as part of the World Athletics Awards 2022.

Amusan’s nomination came after a stellar performance at the Diamond League, Commonwealth Games, and World Athletics Championships in 2022.

She became the first Nigerian world champion after she clocked a wind-aided 12.06 seconds — ineligible as a world record because of +2.5 meters per second strong wind.

The 25-year-old sprinter consolidated her feat with a gold medal at the 2022 Commonwealth Games before retaining her Diamond League title to put a brilliant wrap on her season.