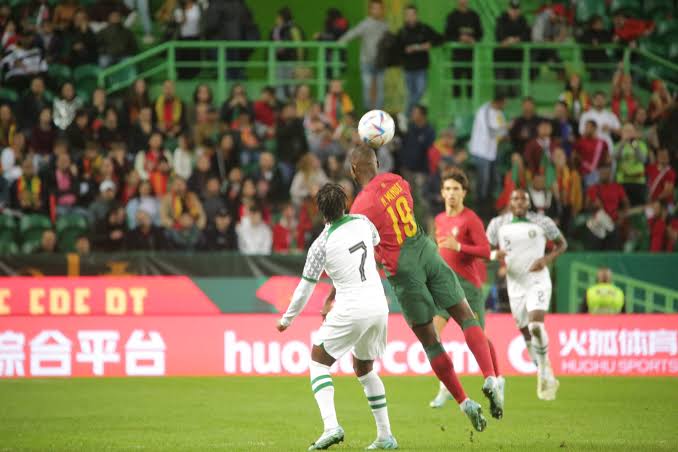 The Super Eagles technical crew will find a lasting solution that would avert a repeat of the ugly scene that played up during last Thursday’s friendly game between Nigeria and Portugal, where two players battled each other to take the penalty kick awarded late in the game.

According to Premium Times, the assistant coach of the Super Eagles, Finidi George, gave this indication during an interview.

The Super Eagles, who were eventually hammered 4-0 by their Portuguese counterparts, were handed a lifeline at 2-0 when debutant Bright Osayi won a penalty kick for Nigeria

However, there was mild drama when both the stand-in captain William Troost-Ekong and Emmanuel Dennis were seen haggling for the ball to take the awarded penalty kick.

Eventually, it was the Nottingham striker who stepped forward for the kick, but even though it appeared to have been well-taken, a slight touch from goalkeeper Rui Patricio, denied Nigeria what could have been their opening goal.

Though Dennis has since been tongue lashed across the social media for his somewhat costly miss, coach Finidi believes missing a penalty kick can happen to the best of players.

The Super Eagles Assistant Coach also assured that specific players will be appointed forehand to take the responsibility of penalty kicks for the national team henceforth.

“I think incidents like that of the penalty taker aren’t going to happen again. Some corrections will definitely be made by the head coach and I think we won’t see such incidents in subsequent games.

Finidi warned that penalty kicks can be missed by even regular takers.

“Even a regular penalty taker can miss, but you have to believe in 2 or 3 to do that. In a team, you must have 1st taker, 2nd and 3rd taker. If one is not playing, the other takes it,” Finidi concluded.

Nigeria’s Super Eagles lost 4-0 in a friendly contest on Thursday night at the Estadio Jose Alvalade against the World Cup-bound Portugal team.