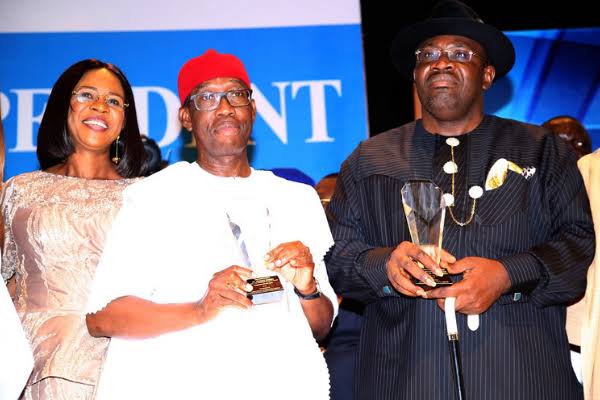 The award was given to the governor by Telegraph Publishing Company Ltd, publishers of New Telegraph titles.

Receiving the award at an impressive event held at Balmoral Hall, Federal Palace Hotel, Lagos, Okowa dedicated the honour to the people of Delta for the opportunity to serve, and commended the board and management of the Newspaper for the recognition.

Represented by Secretary to the State Government, Chief Patrick Ukah, he attributed his administration’s success so far to the cooperation of the people of the state.

“It feels good to be recognised for the good things one has done and as a state government, we appreciate the Management of New Telegraph for this honour.

“For the past seven years plus, we have delivered on our promises to Deltans and as Vice-Presidential Candidate of the PDP, I bring to the ticket industry, humility and focused leadership, which would not be distracted by happenings around.

“We have done a lot on job creation and youth empowerment in Delta and we will take that experience to bear at the federal level and when that happens, the rising unemployment and poverty in the country will be a thing of the past,” he stated.

Earlier in a welcome address, Managing Director/Editor-in-Chief of the newspaper, Mr Ayodele Aminu, had said, “the newspaper which started operation in 2014 had weathered the storm to become an authoritative newspaper in the country”.

He said that award sought to reward individuals and businesses in Nigeria that had distinguished themselves through hard work and remarkable contributions to the development of the nation, in the public and private sectors.