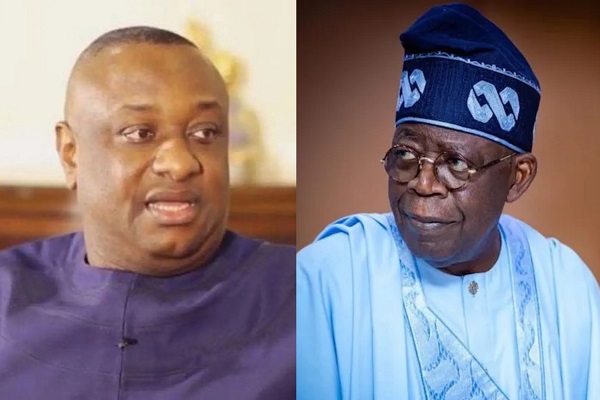 After a video clip of the All Progressives Congress (APC) Presidential candidate Bola Ahmed Tinubu speaking at a townhall meeting went viral, the official spokesperson for APC’s 2023 Presidential Council, Festus Keyamo (SAN), has claimed that what Nigerians heard from the former Lagos Governor was not a slurred speech.

Recall that on Thursday, the APC presidential hopeful appeared at a town hall meeting with private sector stakeholders in Imo State.

As Tinubu outlined his plans for Nigeria should he be elected, he was observably struggling to complete his sentence, instead muttering unintelligible words.

However, Keyamo, a Senior Advocate of Nigeria, took to his Twitter account early on Saturday to clarify that Tinubu, 70, was not struggling to pronounce anything but was merely making jest and did not make a gaffe as Nigerians who saw the clip had suspected.

According to the lawyer, the former Lagos Governor was merely demonstrating his sense of humour.

[READ ALSO] 2023: Why we are preparing for possible rerun elections – INEC

Many Nigerians have since reacted with disbelief at the information, insisting that Tinubu, who has been accused of being unfit to rule, had made a blunder and not a joke as Keyamo was suggesting.

To be honest, in your defense, what he said makes more sense than what you tweeted now.
Jungle SAN

Festus, think carefully God forbid this will be your new job for 8years 😂😂😂 na Lmao https://t.co/Bkj64kBuaG

Spin, baba spin it. Everyday you lend credence to those that believe Lawyers are liars. https://t.co/wi1l1g3VyG

Recall that Tinubu, at his presidential campaign flag-off on Tuesday, partially—and unintentionally—called the name of the opposition party, the People’s Democratic Party (PDP) during his charged exhortation.

PDP had, in a statement by its National Publicity Secretary, Debo Ologunagba, said the Presidential candidate’s flop was a “prophetic blessing” on the party.